Kill John Wick and collect the bounty on his head (failed).

Ms. Perkins is one of the two secondary antagonists (along with Avi) in the 2014 action film John Wick. She is a ruthless assassin who targeted her ex-colleague John Wick under orders from her boss Viggo Tarasov.

She was portrayed by Adrianne Palicki, who also played Sydney Manning in Criminal Minds.

Ms. Perkins is one of the assassins employed by Viggo Tarasov. When she arrives at the Continental, she meets Wick at the reception and claims that is is good to see him again. She later informs Tarasov's assistant Avi that Wick is at the Continental and that she is willing to take him out despite the rules of the Continental which state that no "business" may be done inside of the hotel. To reward her, Viggo doubles the bounty.

While John recovers from his wounds, Perkins sneaks into his room to finish him off. Unbeknownst to her, John's old colleague Marcus watches over him with a sniper rifle. Marcus shoots near Johns head to wake him up. John rises just in time to see Perkins entering his room with a silenced pistol. A fight breaks out wich John eventual wins. After he has defeated Perkins, he asks her about Viggo.

Perkins reluctantly tells him about the place where Viggo hides his money. John leaves her handcuffed with Harry, another guest at the continental, whom he tells to watch over her. When Perkins wakes up, Harry tells her that Winston is not happy about her breaking the rules of the hotel by trying to kill John in his suite. While he talks, Perkins dislocates her thumb to slip out of her cuffs. She knocks down Harry, forces a pillow onto his head and shoots him.

After John kills Iosef, Viggo's men capture Marcus. They torture him for failing to kill John while Ms. Perkins watches. When Marcus manages to wrestle himself free and kill two of Viggo's henchmen, Ms. Perkins shoots him. Marcus is then finished off by Viggo himself.

While waiting outside the building where Marcus was killed to ambush John, she gets called by Winston, the owner of the Continental Hotel. When she meets with him he tells her that her membership has been revoked. Four of his henchmen then shoot her for breaking the rules of the Continental. Winston then hands a gold coin to the cleaner Charlie to get rid of the body. Thus now practically dead, she is wrapped up via plastic wrap and taken away by Charley and his "Waste Disposal" men to be processed and disintegrated, thus leaving no trace of her body or her for that matter.

Compared to other assassins Perkins was ruthless and arrogant. She was willing to break the rules and kill John in the hotel. During the fight she mentioned how she considered him weak. Even after John spared her life she killed the guest that guarded her and kept trying to target him for the bounty.

About the character of Ms. Perkins, Palicki said, "Ms. Perkins is what you think the quintessential assassin would be. She’s cold, heartless, conniving, badass and I think that she has fun with what she does. She enjoys it. I think that she’d clearly do it for a dollar. Ultimately in the film she’s doing it for four million, so it's a little different." Originally the character of Perkins was envisioned as a man in original scenario, but the decision was reversed during a brainstorming session and the desire to create "an authentic female action character". Leitch stated, "You believe this woman could come in and give John Wick a run for his money.", so Stahelski, Leitch and Iwanyk changed it and offered the role to Adrianne. Palicki spoke most highly of working with Reeves and the inclusion of stunt work on her part, to which he stated, "Chad wanted to make sure I would be willing to do my own stuff in the huge fight sequence that I have with Keanu—and I was all game." Palicki spent months of training learning Judo and Jujutsu. After the film's release Palicki revealed background information, "I also think we talked about a backstory. It's likely [Ms. Perkins and Wick] had a history as well, before his marriage. She may have a personal vendetta as well as the money. I think there's an enjoyment on multiple levels." On what she hopes for with regard to the fan response, "It's a lot of fun. They're going to want to see what happens next. Most importantly, I hope they’re rooting for John Wick the way that I did when I read the script.".

Ms. Perkins is a highly skilled operative and a expert in assassination and firearms.

Ms. Perkins is also skilled at hand to hand combat, utilizing the art of Brazilian Jiujitsu and grappling. During her fight against John she used her jacket for lapel chokes and used kimura, tomoe nage, sidemount, crucifix hold, backmount and various takedowns to match John and nearly beat him. 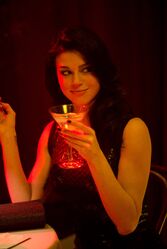 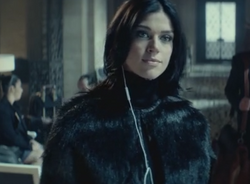 Perkins and Wick meet at the Continental

Perkins is defeated by Wick

Perkins is kept by Harry

Ms. Perkins is executed for breaking the rules of the Continental