The Search for Santa Paws

Use the girls in her home for her own selfish purposes (failed).

Run away with Franklin (possibly succeeded).

Gladys Stout, better known as Ms. Stout, is the main antagonist in the 2010 Disney live-action film The Search for Santa Paws, the spinoff of the Air Buddies franchise. She is the selfish headmistress of the girls' home who finds Christmas, toys, and anything that children love irritating.

She was portrayed by Wendi McLendon-Covey.

Ms. Stout is first seen "welcoming" Quinn at the foster home on 46th Street in New York City, while explaining to Quinn her rules and had Will show her around. That same night, she scolds Santa for accidentally bumping into her. Back at the orphanage, she came into the room wondering what they had to hide from her, she rudely snatches a doll from a girl named Janie and it was mentioned that she confiscates toys and throws them (and other trash) into the incinerator. The next morning, she catches Quinn and Will outside after getting her hair done, berates Will for her disregardful irresponsibility and takes them to the basement where the incinerator is located. Will had to spend the night there due to her being the oldest, and Ms. Stout gave Quinn a harsh warning.

While she was asleep, snoring after eating a box of chocolates apparently given to her from Franklin, the girls sang with Santa Paws. Immediately, Ms. Stout burst in and discovered that not only were they singing, but that they were wearing dresses, the room being decorated with Christmas decorations, and that Paws was there. Quinn confesses that it was her who found Paws, but Ms. Stout does not believe her and sends Will and Paws to the basement. After telling Will that she was going to call the pound in the morning, she took the magic crystal from Paws's collar upon being astounded by the intricate design and (overnight) it turned him back into a toy. The next day, she shows up with Franklin and was furious at Will thinking that she let Paws escape but turned into toy. She takes Paws (as a toy) and throws him into the incinerator while taking Quinn's late mom's Christmas angel as a souvenir for her room. In a deleted scene, she is given a new dress, thanks to the power of Paws's crystal.

Later on, after a trip to Coney Island, Ms. Stout and Franklin arrive back to the home, hoping to expect Will to open the door for them, only to be greeted by Mrs. Gibson who was informed by Eli Elf that the girls were left all alone that night and that Will and Quinn were missing. Ms. Stout fibs that she and Franklin were out looking for them; but Mrs. Gibson (apparently having learned about Ms. Stout's true colors as well as her abusive and opprobrious actions from the other girls and maybe Eli himself) tells her that she is no longer permitted in the house, and gives her a warning that if anything happens to the girls, she will be held directly accountable. In her defiance, Ms. Stout accidentally hits Franklin with her handbag and falls down the steps, leaving their final fates to be decided by the interpretation of the viewer.

Despite her pretty looks (as well as perhaps being a strong-minded and independent young woman), Ms. Stout shows an ugly side to her inner beauty with a highly developed personality of greed and selfishness as she treats the girls terribly and cares much more about spoiling herself. She is extremely rude, haughty, obnoxious, and abusive, so much so that none of the girls have any courage to stand up to her or even rebel against her.

Nothing much is known about the reason as to why she dislikes anything that children love, though it may be suggested that she went through a similar process as the other girls did (an abusive childhood) or is possibly fed up with her job so much that she wants to do nothing but run away with her boyfriend, a dogcatcher named Franklin, in hopes of arranging a quick marriage.

Aside from sharing a comfortable bedroom in the foster home, Ms. Stout also drives a 2003 Volkswagen New Beetle (license plate registration: GZV-47R1) and shops at Bloomingdale's Department Store as evidenced by the bag in her hand when she encounters Santa and Paws. 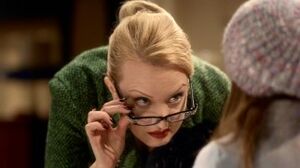