Beavis and Butt-Head Do America

Have his wife killed (formerly).

Muddy Grimes is the central antagonist of Beavis and Butt-head Do America. He is an alcoholic criminal and the unloved husband of Dallas Grimes who comes to into conflict with the titular duo after thinking they deliberately duped him into believing they were gunmen hired to kill his wife.

He was voiced by Bruce Willis, who also portrayed The Jackal in the 1997 film of the same name, Lt. Muldoon in Planet Terror, himself in Gorillaz music video "Stylo" and Old Joe in Looper.

He first appears when speaking on the phone to a friend of his to send hitmen at his wife, Dallas, to steal the X-5 Unit and murder her making it look like an accident. While speaking on the phone, he finds Beavis and Butt-head outside and mistakes them for the men he is hiring, due to his intoxicated state from drinking alcohol and smoking cigarettes a lot. As to using slang, Muddy tells them to "do" Butt-head even though the two mistake this as to meaning sexual intercourse. After telling them the rewards and giving them a picture, they give into the adventure.

Later on though, Muddy finds out that he hired the wrong guys and now he must kill them. He finds them out in the desert where they're almost dead from the heat, and then changes his mind to let them live. He takes the two in his trunk so the police will not find them and have himself arrested, as they are on the FBI's Most Wanted list for carrying the X-5 Unit.

When Muddy makes it to Washington D.C., but then he finds out that Beavis and Butt-head escaped from his trunk and he threatens to kill them, until Dallas seduces him by saying that they'll both kill them. Dallas eventually betrays Muddy when they are both arrested when Muddy says that he and his wife were getting together again. They go back to hating each other, and the last seen of them is when they're arrested in a secured truck, along with Tom Anderson. 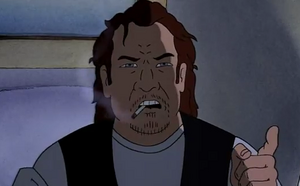 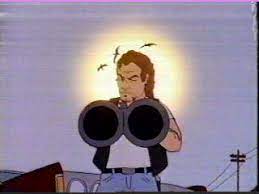 Muddy intending to put Beavis and Butt-head down with his gun.