Mudslinger is an elderly villain from Nickelodeon animated TV show My Life as a Teenage Robot. He first appears in the episode "The Great Unwashed".

He was voiced by Nick Jameson, who also voiced Gigawatt in the same series.

In his debut appearance, he is hired by Brit and Tiff Crust to ruin Jenny's new paint job due to it giving her popularity and an invitation to Don Prima's party. Mudslinger gladly accepts this job and pretends to be hurt to lure Jenny into a trap. Eventually he succeeds in ruining her new paint job but soon becomes terrified as Jenny approaches him while smashing holes in a wall with a mallet.

Mudslinger starts to beg for mercy, saying that he is just a hired hand while also revealing that it was the Crust Cousins' idea. Jenny, who then starts to sizzle, continues approaching Mudslinger while still smashing holes the wall with her mallet. As Mudslinger falls down in fear, he says he sympathizes with her as he never was invited to a party in his whole life. Hearing this, Jenny gives him her invitation much to his delight. Once he arrives at the party, Mudslinger starts ruining the event and saying the Crust Cousins invited him while also claiming they said that Don Prima's parties where boring.

He, Vladimir, Lancer, and the Mad Hammer Bros. formed the Legion of Evil to seek their shared vengeance on Jenny. However, it is fortunate that they have failed. 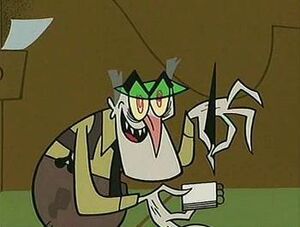 Retrieved from "https://villains.fandom.com/wiki/Mudslinger?oldid=3837469"
Community content is available under CC-BY-SA unless otherwise noted.