Torturing prisoners and soldiers who have failed him.

Mugal is the leader of the Black Hole Planet 3 Aliens' invasion force in the film Terror of Mechagodzilla and the eerily identical-looking successor to Kuronuma. He also appears in an issue of the IDW comic series Godzilla: Legends, though he is portrayed much more sympathetically.

He was portrayed by Gorō Mutsumi who also played Kuronuma.

Mugal arrived on Earth and met with his subordinate Tsuda in Tokyo. Mugal expressed his disgust at the Earthlings' primitive and corrupt society, and his enthusiasm for building a new technological utopia from the ashes of human civilization. Tsuda informed Mugal that he had found a "useful Earthling" who could help them in their mission. Mugal asked why an Earthling would want to help them, and Tsuda replied that this Earthling, Dr. Shinzo Mafune, was once a great scientist whose knowledge advanced too far for his colleagues, prompting them to fire and shun him from the scientific community. Tsuda brought Mafune to the Simians' base in the Japanese wilderness, where he was introduced to Mugal, who revealed who he and his associates were. Mugal told Mafune that if he lent the services of the monster Titanosaurus, whom Mafune controlled, and helped to rebuild Mechagodzilla, then he would provide Mafune and his daughter Katsura with a peaceful prosperous life in their new utopian world.

Mafune assisted the Simians in their plans, but to establish his independence and control he unleashed Titanosaurus without Mugal's approval. Mugal saw this as an opportunity to eliminate threats to his plan: if Godzilla appeared to fight Titanosaurus, he could kill him, eliminating the potential threat of Titanosaurus in the future, while also weakening Godzilla, allowing Mechagodzilla to easily kill him. Godzilla did in fact appear, but only fought Titanosaurus briefly until he retreated. Mugal confronted Mafune and warned him not to disobey him again. Mugal also revealed to Mafune that his daughter Katsura had been augmented with cybernetic modifications, and had the controller for Mechagodzilla implanted inside her. Mafune was distraught, but agreed to help Mugal, as the Simians' cybernetic enhancements had saved Katsura's life twice. Mugal moved the Simians' base of operations to Mafune's lab and had the original base self-destructed following Mechagodzilla's launch. While Mechagodzilla and Titanosaurus leveled Tokyo and battled Godzilla, Mafune's lab was raided by INTERPOL, which caused the deaths of several of Mugal's subordinates. Mugal attempted to escape, and used Dr. Mafune as a human shield to absorb gunfire. Mafune was fatally wounded by a gunshot, and Mugal escaped. INTERPOL chased Mugal to a cliff overlooking the ocean, where he taunted his pursuers before diving into the water below. In a matter of seconds, several Simian spaceships flew out of the water and attempted to escape. Godzilla saw the ships and destroyed them with his atomic breath, killing Mugal and ending the Simian invasion once and for all.

Mugal is cold, brutal, merciless, and destructive, and unlike Kuronuma does little to hide his violent and sadistic nature. While Kuronuma usually wore and air of calmness and false affability, Mugal is also very grouchy, impatient, cantankerous, short-tempered, argumentative, sensitive, and prone to fits of rage. This is most clearly demonstrated when Mugal whips a group of subordinates who allowed a prisoner to escape, then orders them to be immediately executed for their failures. Mugal is also extremely cunning, fraudulent, and manipulative, using Dr. Mafune and his daughter as tools for his conquest of Earth. Mugal is also especially fond of performing an evil laugh.

In Godzilla: Legends, Mugal retains his exploitative and treacherous nature, but is portrayed as a well-intentioned extremist who only desires to save his planet and people, and does not want to be seen as a monster for his actions. 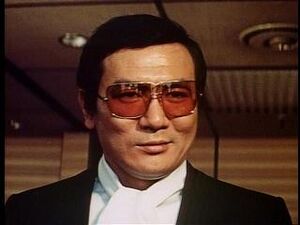 Mugal in his human disguise. 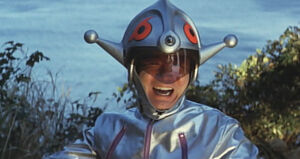 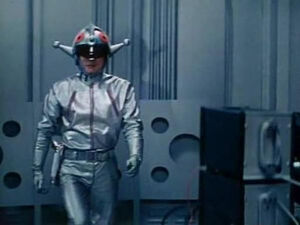 Retrieved from "https://villains.fandom.com/wiki/Mugal?oldid=3981818"
Community content is available under CC-BY-SA unless otherwise noted.