Maintain control of Mesa City and his gambling empire (failed).

Muggshot is a vicious crime-lord and enforcer first appearing in the 2002 videogame Sly Cooper and the Thievious Raccoonus as the main antagonist of Episode 2: Sunset Snake Eyes. He was the chief enforcer of the gang known as the Fiendish Five - maintaining a massive gambling empire in Mesa City, Utah - which was headed by Clockwerk. He was later defeated by the thief Sly Cooper, who came from a long line of master thieves, and captured by Interpol.

He spent some time imprisoned in Heathrow Penitentiary until, probably after three years or so, he escaped (appearing in the 2005 video game, Sly 3: Honour Among Thieves) and formed his own flight team called Team Muggshot to compete in the ACES tournament held in Holland. He was bested by Cooper again and apparently imprisoned a second time.

According to the short film Timing is Everything (released to promote Sly Cooper: Thieves in Time) Muggshot escaped a second time and attempted to make off with a gold watch of some value, only - for the third time - to be bested by the Cooper Gang and captured again.

He was voiced by the late Kevin Blackton, who also played Panda King.

Once a rather puny specimen of a canine, Muggshot would change dramatically after he watched the film the "Dogfather" (a pun on "Godfather") and became obsessed with becoming a gangster himself.

Dedicating himself to training the once "runt" Muggshot grew into a muscular monstrosity who soon lay waste to his enemies and became a powerful crime-lord complete with his own army of henchmen, guns and heavily guarded casinos. He then became a member of the Fiendish Five.

Before Sly Cooper and the Thievious Raccoonus

Muggshot was present, along with the other members of the Fiendish Five, at Sly Cooper's house when Clockwerk had them attack and kill the thief's parents so they could steal the pages of the Thievious Raccoonus, the tome detailing the Cooper's thieving skills. It is unknown what is exact roll was. He took a portion of the pages and hid them in vaults around Mesa City, prompting Sly Cooper to track him down thirteen years later to retrieve the pages and defeat him.

Muggshot was the second member of the five to be defeated by Sly, the first being Sir Raleigh. After retrieving all of the pages held by Muggshot, Sly used several of his 'treasure keys' to gain access to his penthouse, where Muggshot lay in wait for him. The two fought, Sly using his agility and Mugghsot with his massive pistols. Cooper defeated Muggshot by using glass lamps to reflect light at him and make his pistols explode.

After the fight ended, Muggshot expressed his amazement at being bested by Cooper, but stated he would not be able to overcome the third member, Mz. Ruby. He was then captured by Inspector Carmelita Fox of Interpol as the Cooper Gang escaped Mesa City.

In The Adventures of Sly Cooper - Issue #2

Muggshot made a brief appearance in An Old Friend, a short comic story appearing in the second issue of the promotional comic series The Adventures of Sly Cooper, released to promote Sly 3: Honour Among Thieves. He is seen in a cell, alongside Sir Raleigh and Mz. Ruby, presumably where he was imprisoned after the affair in Mesa City. Although not described, it is assumed that he managed to escape in the one year period between Sly 2: Band of Thieves and Sly 3.

Muggshot somehow escaped the long-arm of the law and turned up in Holland when the Cooper Gang arrived. Both parties were attempting to win an aviation contest called ACES, Muggshot with Team Muggshot and the Cooper Gang with Team Cooper. However, while the gang was trying to best the infamous Black Baron - a flying ace who never lost -, Muggshot just wanted to win for the glory and the prize. The gang initially spotted him boasting loudly about his team in the hotel where the pilots were staying while they competed. He then tried to break into the hanger housing the plane which Sly and his friends were restoring for the contest, but failed to eliminate the competition.

In order to get rid of him, Sly's wheelchair-bound techno-whiz friend Bentley provoked Muggshot to face him in a fight the afternoon before the competition. This was actually a set-up, as Muggshot came face-to-face with Inspector Fox for a second time. Although Muggshot employed his brute strength and weaponry, he was beaten by the inspector and incarcerated once more, thus removing him and his team from the ACES competition.

Although he was imprisoned during the events of Sly 3, it is suggested that Muggshot soon escaped capture after the episode in Holland. Although the film was released as promotional material for Sly Cooper: Thieves in Time, the fact that the Cooper Gang have their van - which was recovered in their subsequent skirmish with General Tsao - and that Sly has not begun a relationship with Carmelita as per the ending of the third game, suggest that Muggshot encountered Sly again before the final showdown with Dr. M.

In the film, Muggshot and his minions have stolen a valuable gold watch which the Cooper Gang intend to take. Having fitted the van with wings and a rocket engine, the gang infiltrate the plane containing the vault where the watch is kept. Sly encounters Carmelita, who has been captured by the gangster, but leaves her tied up so Muggshot does not discover them. He sets of an alarm which lures away the guards at the vault, but finds Muggshot wise to him, wearing the watch. The two fight and Muggshot gains the upper hand before he notices that Sly has removed the watch from his wrist. Sly then uses the watch to punch Muggshot in the face, knocking him out.

Carmelita has escaped in the meantime and comes to arrest them both, when the cockpit controls shattered during the fight cause the plane to plummet towards a mountain. The van crashes into the cockpit and Bentley attaches a line to Muggshot's body - allowing Sly and Carmelita to climb aboard - and ejects just before the plane crashes into the mountain. The gang leave Muggshot and the watch with Carmelita (who is initially angered by Sly's escape) on the mountainside, having used parachutes to avoid crash-landing, after which he is presumably arrested for his crimes. 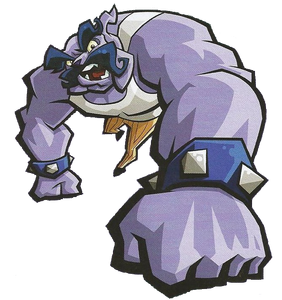 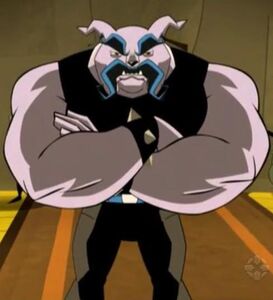 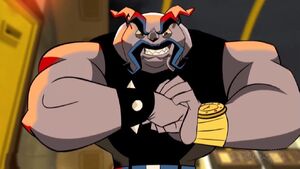 Retrieved from "https://villains.fandom.com/wiki/Muggshot?oldid=3985392"
Community content is available under CC-BY-SA unless otherwise noted.