Antlion Thunder is a Shocker Kaijin with the characteristics of a centipede and an antagonist in episode 26 of Kamen Rider.

He was voiced by Ritsuo Sawa, who later voiced Ten-Faced Demon Gorgos in Kamen Rider Amazon.

At the order of Colonel Zor, Mukaderas abducted intelligent children with his hypnotic radio waves to use them to form a "Junior Shocker". After hypnotizing and abducting Namie Ikusawa, they also abducted her classmate Goro Ishikura after she recommended him to Colonel Zol. They later dispatched the Junior Shocker members to annihilate Hayato. While Kazuya Taki held them off, Hayato Ichimonji transformed into Kamen Rider 2 and followed the hypnotic radio waves to track down Mukaderas. In response, Mukaderas sent the reborn monsters Gebacondor and Sarracennian, but both were defeated by Kamen Rider 2. Mukaderas himself was destroyed after he received a Rider Kick from Kamen Rider 2, freeing the children from his influence.

Mukaderas was later reconstructed in the movie "Kamen Rider vs. Shocker". 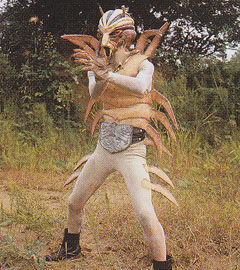 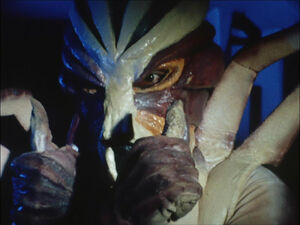 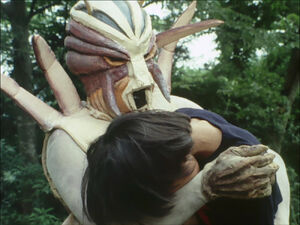 Retrieved from "https://villains.fandom.com/wiki/Mukaderas?oldid=4187020"
Community content is available under CC-BY-SA unless otherwise noted.