Member of the Ultimate Despair

Assist her sister in spreading despair around the world. (formerly/mainly succeeded)

Help her classmates escape from the Killing School Life (succeeded/Danganronpa: IF only)

She is a student at Hope's Peak Academy, in which her talent is the Ultimate Soldier. Initially believed to be the Ultimate Fashionista, Junko Enoshima, she is in fact her older twin sister who was secretly posing as her in the Killing School Life. She is one of the main leaders of the Ultimate Despair, where she acts as Junko's right-hand and enforcer, carrying out every order given to her.

She is voiced by Megumi Toyoguchi in the original Japanese versions for both the video games and the anime adaptations, while she is voiced by Jamie Marchi in the English dubbed versions of the anime, all of which also provide the voices for Junko Enoshima as well.

Mukuro is a 5'7" tall, high school teenager, relatively the same height as her sister. Despite being twins, Mukuro possesses a couple of characteristics that makes her different from Junko such as her grey eyes, her freckles and short, black hair. She also has a much smaller chest in comparison. In Danganronpa Zero and Danganronpa 3, her hair is noticeably a bit longer than how it is in Dangaronpa: Trigger Happy Havoc.

Mukuro tends to be seen in different outfits, but for the most part, she is mainly seen wearing a white-buttoned shirt with a red ribbon attached to her neck, a dark skirt and high black socks with black shoes. During her time at Hope's Peak Academy, she is seen wearing a brown jacket in the pictures. Other times, she's seen wearing military outfits with various weapons and equipment.

As Junko Enoshima, she wore an outfit that was very identical to her sister's appearance in the Despair Arc where she had a large white and red bowtie and a white rabbit in her hair. Her clothing is very much identical to her sister's in the Killing School Life, except the tie is a white one with black spots instead of the black and white one that the real Junko wears.

As the Ultimate Soldier, Mukuro is a cold-blooded assassin that carries out acts of murder without hesitation and shows no signs of remorse for doing so. Part of this may be because of the abuse she was subjected to by Junko herself. As a result, Mukuro follows every order given from her sister, rarely ever expressing her own thoughts and opinion on the matter. However, because of this, Mukuro doesn't take pleasure in killing and torturing others and only commits these acts because they are her orders given.

Due to growing up in a miserable life with her sister, Mukuro has only ever learned to be of good use to her sister. As such, she is very protective of her and threatens to harm anyone that tries to put her sister in danger. Despite Junko's horrible treatment to her, Mukuro doesn't appear to mind it and has instead developed masochistic tendencies when receiving her verbal and physical abuse. However, when she was killed within the Killing School Life, it appeared that Mukuro felt heartbroken and betrayed that her own sister ultimately used her as a pawn to her schemes.

The only other person Mukuro has ever shown to be protective and caring for is Makoto Naegi, who she fell in love with as he was the first and only person to ever offer her a genuine smile. Though she would at times deny her feelings for him and openly call him a loser, her behavior suggested otherwise as she would often watch him wherever he would go and when the class would take pictures together, she'd only look at directly at the camera if he was taking the picture. Outside of Makoto and Junko, Mukuro doesn't appear to care for anyone else, though she holds no disdain for them either.

In the light novel, Danganronpa: IF, much of Mukuro's original personality has changed after realizing that how very little Junko truly cares for her. She has become very protective of Makoto, going as far as to treat his wounds from the Spears of Gungnir and is determined to help both him and their classmates escape from the Killing School Life, as well as sabotaging Junko's plans entirely.

As "Junko Enoshima", Mukuro acts very much like her sister based on her talent; someone who is eagerly outgoing, friendly and has some extravagant tastes in fashion. According to Junko herself, however, Mukuro doesn't truly understand the world around her as she lacks social skills and communication to others. Despite being the Ultimate Soldier, Mukuro is not much of a tactical strategist and because of that, Junko believed Mukuro would never truly pull off both her personality and the role of the mastermind. Even prior to her death, there are moments where Mukuro (when disguised as Junko) implies she's not who she truly is as her favourite gifts are field rations, which are food supplies for military soldiers and in her School Mode ending, she tells Makoto that she's always been a "disappointment" according to "her." 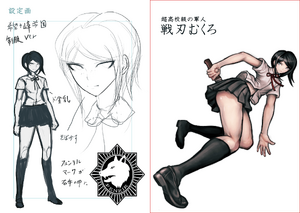 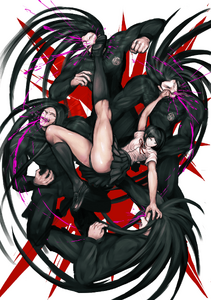 Mukuro battling against the Madarai Brothers. 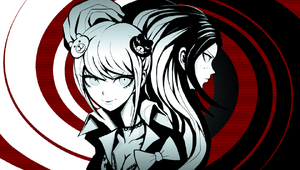 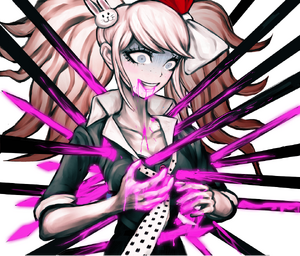 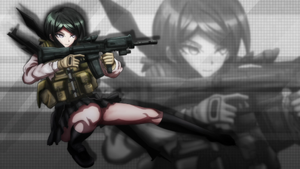 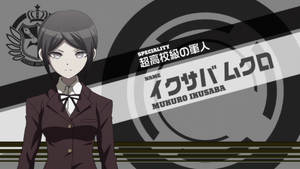 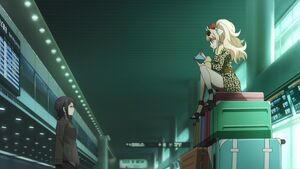 Mukuro meeting up with Junko at the airport. 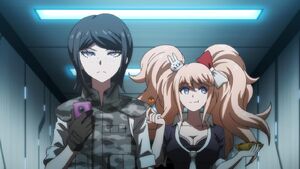 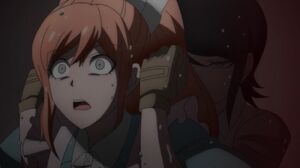 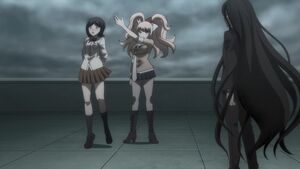 Mukuro being slapped by Junko. 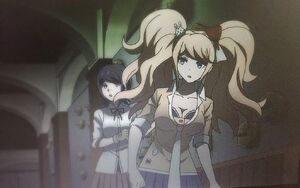 Mukuro and Junko during the closing of Hope's Peak Academy.