Leader of the goblins

Find and steal Arthur Spiderwick's Field Guide in order to gain control over his power.

Become the most powerful creature in the world and wipe out humanity.
Kill Arthur Spiderwick and the Grace family (all failed).

Mulgarath is the main antagonist of the bestselling book series The Spiderwick Chronicles by Tony DiTerlizzi and Holly Black. He is an evil, gigantic ogre whose goal throughout the series was to steal Arthur Spiderwick's Field Guide to become more powerful. He is the archenemy of Jared Grace.

In the 2008 film adaptation, he was both voiced and portrayed by Nick Nolte in his human form and ogre form, who also played Vincent in Over the Hedge, Frank Stockburn in The Ridiculous Six, Burt Johnson in Arthur, Inspector Thomas Cray in Nightwatch, and David Banner in Hulk. In his disguise as Richard Grace, he was portrayed by Andrew McCarthy.

Mulgarath is highly intelligent, traitorous, arrogant, ruthless and sadistic. Like all ogres, Mulgarath is known for bullying other unseen creatures, as he demonstrates tendencies in commanding or ordering other faeries. He also exhibits treacherous and Machiavellian tendencies in bribing the Dwarves to make the weapons he desires then murdering them when they are of no further use. He establishes himself as a cunning, loathsome, and duplicitous schemer and a master manipulator throughout the course of the series. As is the case with most archetypal villains, Mulgarath's egotistical and unscrupulous nature eventually results in his downfall. When he catches the Grace children at his mercy at the climax of the final book, he stops to tell them about his plans and how much cleverer he is than them, giving them time to defeat him.

Mulgarath has the ability to transform into other organisms, since he is inspired by the ogre from Charles Perrault's 1697 fairytale Puss in Boots. Ones mentioned include a human, a snake, and a raven. Shortly before his defeat at the hands of Hogsqueal, he extremely appears as Richard Grace, but this is quickly discovered by Jared. Mulgarath is very strong and influential, so he kills some of his own goblins, due to incompetence or anger. In the final scene of the film, he destroys most of the house with his fury and almost succeed when he transformed into a raven and snatched the field guide, but instead got eaten by Hogsqueal since his diet consists mainly of birds.

Mulgarath is the main antagonist of the series, despite only appearing in the fourth and fifth book. He is first mentioned in the fourth when the dwarf Lord Korting states that Mulgarath the Ogre is gathering an army of Goblins. In the fourth book he tricks the Dwarves into stealing the Field Guide and making weapons for his army, saying that when he rules the Earth, he will remake it in gold, silver, copper, and iron, playing on the Dwarves' love of metal. He also uses his shapeshifting powers to assume the form of Simon and steal the Field Guide which the Dwarves fail to do. Jared, Simon, and Mallory see Mulgarath at the climax of the book and watch him and his Goblin army collect their weapons from the Dwarves. Declaring that he has no further use for the Dwarves, Mulgarath orders the Goblins to kill them. Jared, Simon, and Mallory watch in horror as the Dwarves are viciously murdered.

In the last book of the series, the Grace children learn that Mulgarath has sent his minions to ransack their house and kidnap their mother. Together with Byron the Griffin, Thimbletack the Brownie and Hogsqueal the Hobgoblin, they journey to Mulgarath's palace of corrugated iron in the junkyard where they discover that he is breeding an army of Dragons with which he plans to conquer the world. Simon remorsefully kills the baby dragons (Salamanders) as Byron battles the mother. They then infiltrate the palace and find their parents held captive in the tower. Their father proves to be Mulgarath in disguise and he grabs Simon and Mallory. Jared, remembering that Arthur told him that ogres think a lot of themselves and like to talk, keeps Mulgarath talking while Thimbletack attempts to tie a chain around the ogre's ankle. Mulgarath notices and kicks Thimbletack across the room. Enraged at nearly being tricked, the ogre throws Simon and Mallory out of the window but they grab onto chains and hang on for their lives. Jared stabs Mulgarath in the foot with Mallory's sword and knocks him out of the window. The murderous ogre transforms into a dragon and attempts to climb up one of the chains back to the balcony, but Jared cuts through the chain. As Mulgarath falls toward the pit, however, he transforms again, this time into a swallow bird. He flies out of the pit and is about to summon his army of Goblins, when Hogsqueal suddenly arrives and bites off the bird's head.

Mulgarath is slightly different in the movie. In the book, Mulgarath is regal and dresses in the tattered remains of clothes from a bygone era. In the film, he has no clothes and some branches and weeds. Also in the book he usually relies on his great intelligence to battle his enemies, despite the immense strength he possesses. At the end of the film, Mulgarath chases Jared around the house all the way to the roof. With no other option, Jared tosses the field guide high into the air, Mulgarath transforms into his raven form, grabs the book and flies away. However, as Mulgarath flies away, Hogsqueal (who had been hiding in a tree) grabs the evil ogre and eats him before he has time to transform again. 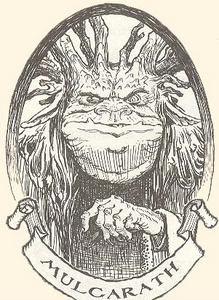 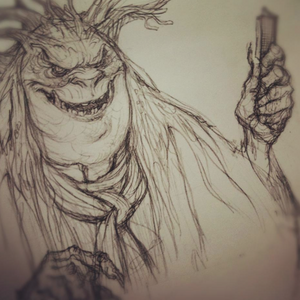 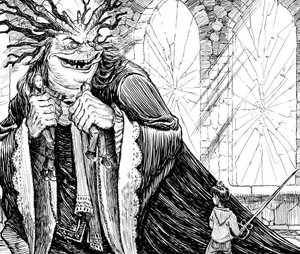 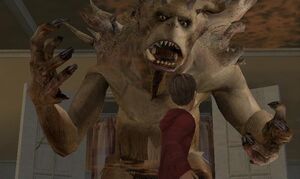 Mulgarath in The Spiderwick Chronicles game. 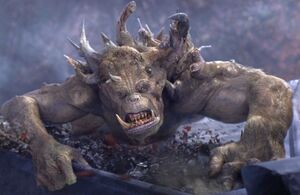 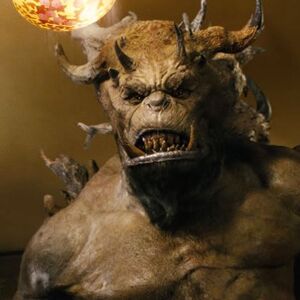 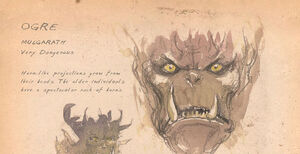 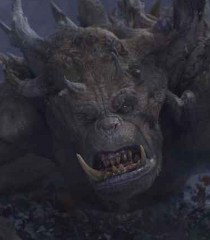 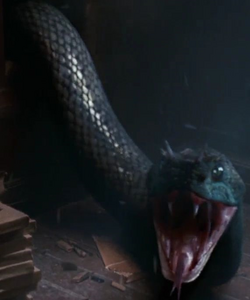 Mulgarath in pursuit of Jared Grace. 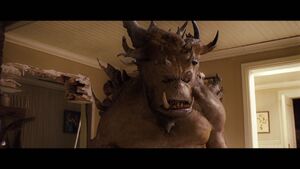 Mulgarath breaking into the Spiderwick Estate. 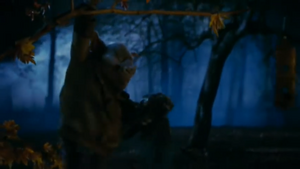