Mumbles is a villain in the Dick Tracy comic strip, the movie, the 1960s cartoon, and the Archie's TV Funnies Dick Tracy segments. In the film, he is portrayed by Dustin Hoffman, who also portrayed Captain Hook in Hook and Ratso Rizzo in Midnight Cowboy.

In the comic strip, Mumbles is one of Dick Tracy's most recurring villains. He originally appears as a thief that is a member of the Mumbles Quartet band but ends up apparently drowning at sea. It is later shown that he was rescued by George Ozone and worked in his employ. Mumbles conspires with Ozone's ex-wife to murder him and dig up the buried treasure that's map is tattooed on his son's feet. Mumbles is shown drowning again and his body is recovered by the police.

Mumble's "clone" is shown to Tracy by Dr. Zy Ghote. It was revealed that he had survived his apparent drowning in 1955 by using yoga breathing techniques that he had learned from Ozone to slow his heart rate and respiration, creating the appearance of death. Mumbles had later bribed the coroner to falsify the death certificate and made his escape, and he was hired by Ghote to pose as his clone. Mumbles was arrested for attempted murder.

Mumbles briefly attempted to extort the makers of The Dick Tracy Story feature film, on which he was working as a consultant. His scheme was uncovered and he returned to prison. Years later, Mumbles was shown working for the new Mister Crime's gang along with B-B Eyes. After Mr. Crime's gang was dismantled, Mumbles joined The Black Hearts, a new criminal organization.

In the 1960s cartoon, Mumbles was often showed working with Stooge Viller, and had a voice that was electronically distorted to be completely incomprehensible and needs Stooge to translate for him.

In the Archie's TV Funnies Dick Tracy segments, his speech was depicted as incomprehensible grumbling, which only one other character (Professor Transo) could understand.

In the movie, Mumbles was a lieutenant of Al "Big Boy" Caprice, having previously worked for Lips Manlis. He was presented as part of a trio of Big Boy's most trusted henchmen, along with Itchy and Flattop.

Tracy held Mumbles for interrogation during his investigation of Lips Manlis' death. Tracy believed Mumbles to be the weakest of the three and therefore most likely to give up information. Mumbles, who was sweating under hot lights, was taunted by Tracy with water held just out of reach. Mumbles finally gave a statement, but it was so high-pitched and garbled as to be incomprehensible.

Later, Tracy revealed to Mumbles that the water cooler had a tape recorder hidden inside it. He played the tape back as a slower speed, which made Mumbles' statement (which incriminated Big Boy) clearer and easier to understand. Fearing reprisal from Big Boy, Mumbles co-operated with Tracy and, speaking slowly and clearly, told the detective what he wanted to know. 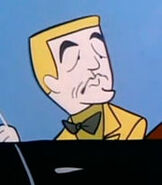