The Amazing Mumbo
The Great Bluedini (by Beast Boy)

Mumbo Jumbo, also known as The Amazing Mumbo or simply Mumbo, is a recurring antagonist in the Teen Titans series. He is an evil magician who is very skilled at theft and magic, and while usually just a minor crook, he has proven to be one of the most difficult villains to handle at times, but always manages to get defeated in the end.

He was voiced by Tom Kenny, who voiced Doctor Octopus in Ultimate Spider-Man and Hulk and the Agents of S.M.A.S.H., Penguin in The Batman, and Ice King in Adventure Time.

Mumbo Jumbo first appeared in "The Sum of His Parts". He easily defeated Cyborg while the rest of the titans went in pursuit of Mumbo. After Robin broke his magic wand, he was sent to jail.

He appears again much later with his wand restored in "Aftershock - Part 2" robbing a bank, however he is easily taken out by Terra.

Later on, Mumbo returned in "Bunny Raven... or ...How to Make A Titananimal Disappear" as the main antagonist. He sent the Titans to his own world inside his hat and turned them into animals: Robin into a monkey, Starfire into a tiger, Cyborg into a bear, Beast Boy into shape-shifting objects, and Raven into a bunny.

Mumbo was trying to make the Teen Titans disappear permanently, but Raven hatched a plan and used invisible paint. She then performed a magic hat-trick that send her foot out of the hat into the real world, kicking Mumbo in the face. They return to their world and the Teen Titans reverted back to their original forms. Raven then takes Mumbo's hat and Mumbo was taken to prison.

Some time later, Mumbo was recruited into the Brotherhood of Evil. He participated in Ding Dong Daddy's race for Robin's most secret possession, but was taken out in a mass crash triggered by Red X. When Beast Boy lead Mas, Herald, Pantha, and Jericho in an assault to the Brotherhood's Base, Mumbo was defeated by Beast Boy's Tyrannosaurus form with a tail whip. Mumbo was then seen flash-frozen at the end of the battle. 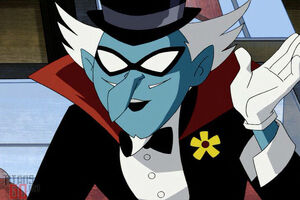 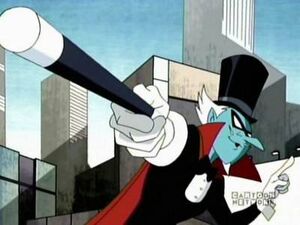 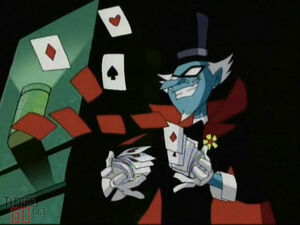 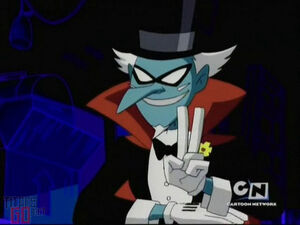 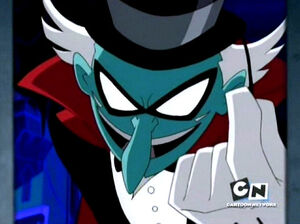 Mumbo up to his tricks. 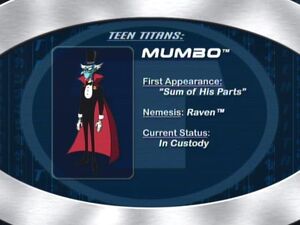