Acquire the Monado for himself.

Mumkhar (also known as "Metal Face") is a supporting antagonist in the 2012 videogame Xenoblade Chronicles.

He is said to have once been an honorable yet unreliable man, but his obsession with the Monado and his jealousy of Dunban turned him into a traitor, as seen in the beginning of the game. He is the main reason Shulk begins the journey to the Bionis' head and serves as the primary antagonist along with Xord throughout most of the first half of the game.

Prior to Xenoblade Chronicles

Deserting Dunban and Dickson during the Battle of Sword Valley after the battle takes a turn for the worse, he reveals plans to collect the Monado after the battle is over, but runs straight into a group of hidden Mechon and is presumably killed.

Leading the raid against Colony 9, Metal Face is the one who "kills" Fiora—causing Shulk to mark Metal Face as his rival. Shulk's primary motivation throughout the first half of the game is to kill Metal Face once and for all. During the battle it is revealed that Metal Face is immune to the Monado's effects, making him an incredibly dangerous adversary. During this sequence he mocks Shulk with a wag of his finger. Metal Face also gravely wounds Colonel Vangarre in the assault. He eventually flees the raid, withdrawing his troops.

Metal Face is mentioned later by Xord as having "scarpered". As Xord continues his efforts against the Monado's wielder, Shulk, Metal Face is repaired from his earlier battle and now has a voice and working mouth.

After Xord's explosion and the brief lift ride to the surface, Metal Face immediately attacks with an army of Xord Replicas and Mechon Models M64X and M53X. Just as things look grim for the party, Dunban and Dickson appear to fight off Metal Face's army. During the scarper Metal Face taunts the fighters, telling them the Monado does not work for a "bunch of losers" and how much he enjoyed Fiora's screams of pain. Just as he is about to strike the finishing blow, a strange bird appears and attacks him, allowing the Monado to cut into his limbs. Taking this as a sign to flee, Metal Face takes off, leaving a frustrated Shulk and Reyn.

During a premonition, Shulk envisions facing Metal Face atop a huge tower (later revealed to be Prison Island), and winning the fight. This is what drives them to continue up Bionis.

Metal Face appears with a new weapon which looks like a spear that can suck out Ether out of a life form (such as a Homs or a High Entia). When the group arrives at the top of Prison Island, Zanza allows Shulk to upgrade the Monado. As Zanza is allowing Shulk to upgrade the Monado, Metal Face throws the spear which pierces Zanza in the chest, killing him. He also kills Sorean while he was protecting Melia. Just before Zanza dies, he tells Shulk that the process is complete and Shulk transforms the Monado into the Monado II. Using it, he fights Metal Face. After the battle, Shulk manages to cut off Metal Face's left arm. As he is about to finish Metal Face off, Silver Face (Face Nemesis) protects Metal Face and it is shown that Fiora is still alive. Silver Face/Face Nemesis flies off and Metal Face follows with the Mass-Produced Faces.

At one point during the showdown, Metal Face hints at Dunban his identity through an attack with his claws, which Mumkhar also used. The shock on Dunban's face confirms he recognizes this, but does not believe it could be his old friend. The moment is not mentioned afterwards.

Near the end of Valak Mountain, it is revealed that the one piloting Metal Face was in fact Mumkhar, who had survived and defected to the Mechonis sometime after the Battle of Sword Valley, where he extracts himself from the Faced Mechon to collect the Monado after Shulk places it in the snow. He shows that he is able to control his Faced Mechon even from outside its cockpit. Mumkhar fights the party, and his mechanical body is damaged by Dunban just as Egil arrives, and the two leave with Face Nemesis and head back to Galahad Fortress.

The party meets Mumkhar again at the Heavy Machine Depot in the Sword Valley, accompanied with two Mass-Produced Faces. The copies and Mumkhar himself are outfitted with special weapons that can fatally poison any being from Bionis. Even with this upgraded equipment, Dunban overpowers Mumkhar, and is about to kill him when Shulk intervenes and talks him down. They agree to let Mumkhar go, with Dunban declaring that they have better things to do than fight Mumkhar, but the latter is enraged, thinking he was just trying to get the last word. Shulk recieves a cryptic vision of Mumkhar running into the path of a falling statue of a sword. Unsure of what this means, Shulk tells Mumkhar not to move to try and prevent the vision from happening but he fires one last shot at the two, which misses and hits the side of Galahad Fortress, shaking loose a sharp spire from the structure which falls and impales Mumkhar inside his Mechon. The force of the impact causes the platform on which the battle took place to break off from the Mechonis' Sword and fall into the Great Sea, with Mumkhar effectively nailed to it, still alive and screaming as he plummets to his death.

While exploring the Fallen Arm, the party can find the location Black Wreckage, which is the remains of Mumkhar's Face Mechon. It is also the location of a Heart-to-Heart between Dunban and Melia - "Eternal Scars" - in which Dunban explains who Mumkhar was and how he coveted the hero status Dunban gained through use of the Monado and wanted it for himself. Dunban also explains that, even as he cannot forgive him, he wishes that he found peace at last, showing that he still cares for his old brother-in-arms. At this same Heart-to-Heart Dunban mentions that Mumkhar was originally from another colony that was destroyed long ago.

In the Super Smash Bros. series, Metal Face appears in Super Smash Bros. for Wii U and Super Smash Bros. Ultimate as a stage boss on the Gaur Plain stage. If there are four or less fighters on stage when nighttime comes, Metal Face may show up and slash his claws to destroy most of the stage. He also taunts the players, with significant quotes if one of the fighters is Shulk. He can be KO'd, and similarly the Yellow Devil, he explodes upon defeat, causing heavy damage to every fighter caught in the blast except whoever dealt the finishing blow.

In Ultimate, Mumkhar also appears as a Spirit, being a Primary Attack-type. His Spirit Battle is a Stamina battle against Wolf O'Donnell on the Gaur Plain stage. At critical health, he enlarges and turns metal. At level 99, Mumkhar can be enhanced to become Metal Face, whose ability makes the player start the battle both giant sized and metal.

One of the Mechonis machinery life forms known as "Mechons", this unit is used exclusively by the powerful warrior Mumkhar. The entire unit is colored black.

Mumkhar once used it to attack Colony 9, seriously injuring Fiora in the process.

Metal Face's sharp and angular body is incredibly well-armored, and its attack power matches the ferocity of Mumkhar's own personality. Along with the slashes it makes with long, liquid-filled claws, it can also transform into flight mode and fire energy shots from its man cannon.

Metal Face has a much more elegant appearance compared to most Mechon in the game. He has blades for fingers and most of his body appears almost skeletal. He also has a cannon mounted on its head. Finally, he has an "abdomen" that is actually the engine used to give Metal Face flight. After getting repaired from his second encounter with Shulk, the "horns" on his head are switched for blood red ones and it's given a bulkier outer shell, which conceals most of its abdomen and gives it greater resilience.

Metal Face is vicious and cruel. The only thing that he desires in life is to slice his prey to ribbons; however, it has a soft spot for causing anger in others, seen when it confronts Shulk for the second time. It is never made clear whether it has an appetite along the lines of Xord (or if it even eats for that matter). It is also quite cunning but very cowardly; if it feels it is personally in danger, it will flee, though more often than not is this quite justified. Later in the game he reveals to want the Monado for himself, though its unknown for what purpose as its initial reasons would be impossible after becoming the Faced Mechon he is today. It possesses a great, burning hatred towards both Shulk and Dunban, the former due to being a great threat, and the latter out of jealousy. 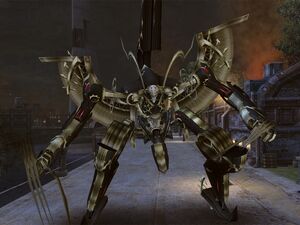 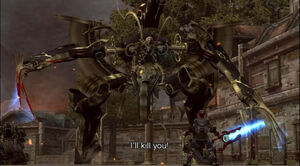 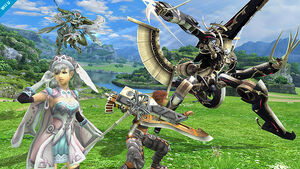 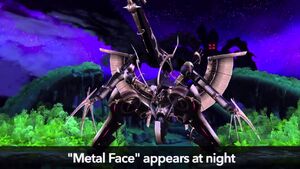 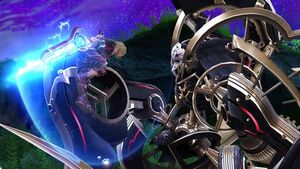 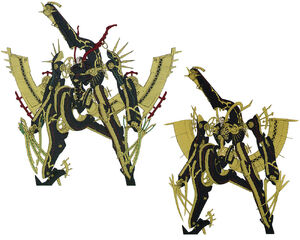 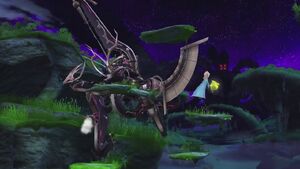 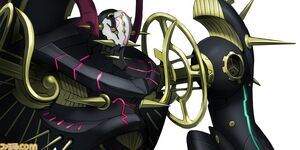 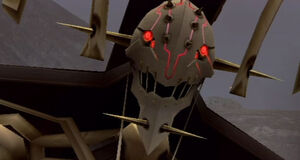 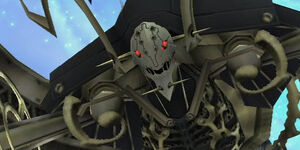 Retrieved from "https://villains.fandom.com/wiki/Mumkhar?oldid=3468657"
Community content is available under CC-BY-SA unless otherwise noted.