Servant of the Ancient Spirits of Evil

Mumm-Ra is an undead sorcerer and the main antagonist of the 2011 ThunderCats series. Like his 1985 counterpart Mumm-Ra is the bound servant of the Ancient Spirits of Evil. His species is initially unknown, but he eventually reveals himself to be a humanoid vampire bat.

He was voiced by Robin Atkin Downes, who also portrayed Falcon Graves from Ducktales 2017 and Broseph Chillaxton from Regular Show, who also voices as Medic from Team Fortress 2.

Little is known about Mumm-Ra's origins. However, at some point in the distant past Mumm-Ra commanded a fleet of warships that were combing space for Power Stones - stones of immense power that would make Mumm-Ra invincible. On his ships were several enslaved anthropomorphic animal species - including Cats, Birds, Dogs, Monkeys, Jackals, and Lizards that did Mumm-Ra's will.

After Mumm-Ra destroyed the Plunn-Darr star system to create material that would allow him to forge a very powerful sword, the Cat leader Leo lead a revolt against Mumm-Ra. Mumm-Ra's ship crashed on Third-Earth, and Mumm-Ra sealed himself in his sarcophagus. The various free animal species divided the Power Stones amongst themselves and proceeded to settle Third Earth.

For the next several millennia Mumm-Ra remained in hibernation. When he judged it safe, he emerged from hibernation. Gathering willing allies, Mumm-Ra started his campaign to retrieve the Power Stones, conquer Third Earth, and re-enslave the species living there.

Mumm-Ra has incredible dark magical power. He can shapeshift into a variety of forms, control his wrappings to trap and lift others, and project bolts of dark energy. Mumm-Ra can also levitate, perform scrying in his pyramid, conjure imprisonment spheres, probe minds, capture souls, and use mind control and telekinesis. His powers are at their full potential inside his Black Pyramid, allowing him to influence minds at long distances and perform a lengthy ritual to remove the protective spell on the Sword of Omens.

Mumm-Ra can also transform himself into "Mumm-Ra, the Ever-Living", a vigorous form by reciting his famous incantation: “Ancient Spirits of Evil, transform this decayed form into Mumm-Ra, the Ever-Living!” Mumm-Ra possesses much greater strength and resilience in this form, large wings capable of flight, and enhanced mystical power to battle his foes. The price of this power however, is limited endurance: once Mumm-Ra, the Ever-Living has surpassed a given threshold of energy expenditure, he must revert to his mummified form, and enter his sarcophagus to rejuvenate himself.

Also, Mumm-Ra is regarded as immortal, and when defeated or "killed," he simply returns to his sarcophagus. 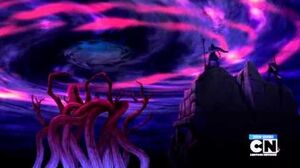 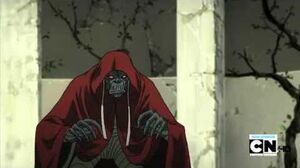