The Mummy is a one-time villain from Total Dramarama, only appearing in the episode "That's a Wrap". He is an ancient mummy corpse that used to reside in a natural history museum before he was awoken, by Duncan stealing his ancient artifact.

In "That's a Wrap", the kids went to a natural history museum. One of the things there was a mummy tomb. Gwen went to sleep in it, next to the corpse of a mummy. Duncan and Cody later came by, dressed as a mummy and scared Owen, Izzy, and Harold as a joke. After they did, Duncan noticed there was an ancient piece of Egyptian jewelry in the mummy exhibit and snatched it to make it part of his mummy costume. Stealing this ancient artifact unleashed an ancient Egyptian curse onto the mummy, waking it up from its death. The mummy was set on finding whoever stole his treasure and searched the museum in anger.

Owen, Izzy, and Harold hid in some clay pots and fearfully told Courtney what happened. Courtney convinced the others that this mummy was just Duncan in disguise, trying to prank them. Just then, the real mummy showed up to terrorize the kids and Courtney thought this was just Duncan. So she insulted and beat up the mummy. Just then, Duncan came in and tried to scare Courtney. Courtney noticed that if Duncan was there, then the person she beat up had to have been the real mummy, sending her into an absolute panic. Duncan said that although technically the mummy was the one who scared Courtney, he deserves partial credit and that he can say he scared Courtney.

Chef saw the craziness that was going on and told Duncan that he had to fix things. He made him fix things by making Duncan buy the mummy a hotdog, by spending his own allowance. This managed to make the mummy forget about the whole incident as he took mack his ancient artifact. When the mummy ate his hotdog, he got mustard on Duncan's shoe. Izzy said that Duncan could wipe it off with some of the mummy's toilet paper and she yanked some of the gauzes off of the mummy's foot, unraveling it and causing it to turn to a pile of dust, killing it by mistake. After killing the mummy, Owen took it's half-eaten hotdog and ate it for himself. 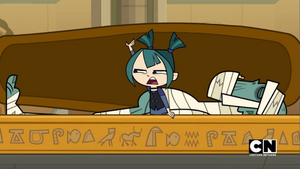 Gwen sleeping in the Mummy's tomb. 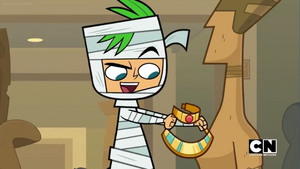 Duncan steals The Necklace of the Pharoah. 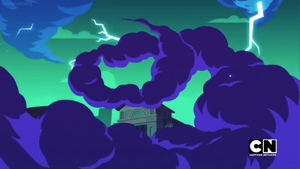 The curse of The Mummy. 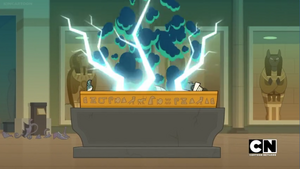 The Mummy's curse rising it from the dead. 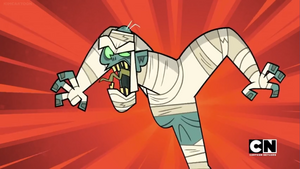 The Mummy is mad. 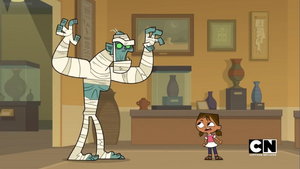 Courtney thinks The Mummy is Duncan and scolds it. 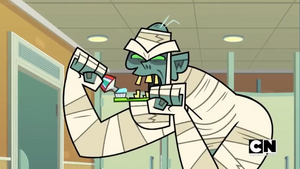 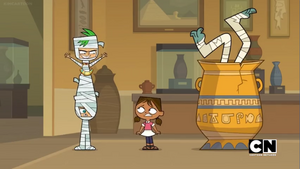 Duncan (the fake mummy) and The Mummy (the real mummy). 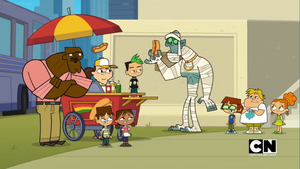 The kids eat hot dogs with The Mummy. 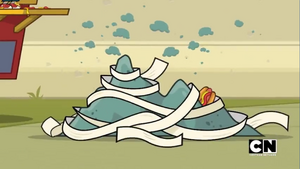 The Mummy gets turned to ash. 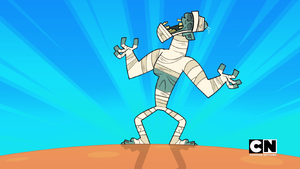 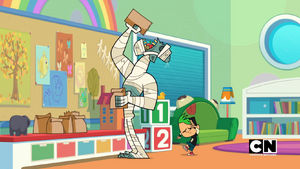 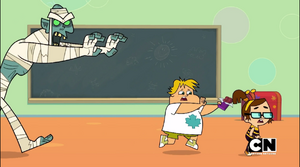 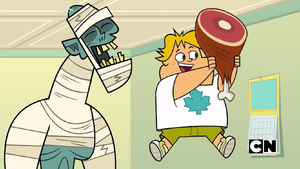 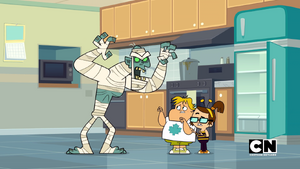 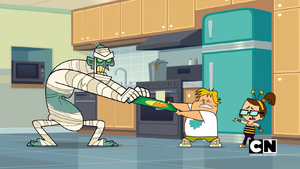 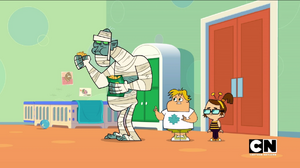 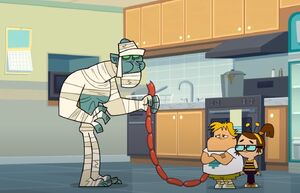 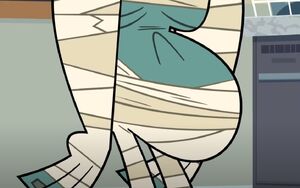 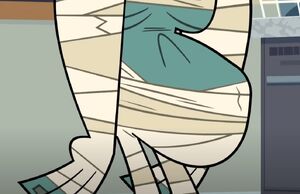 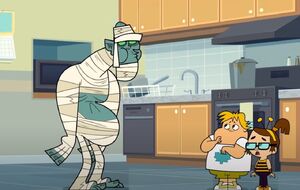