Expertise with disguising himself
Tangling others with his mummy wrapping

To take over the Digital World with Arukenimon (failed).

Mummymon is Arukenimon's right-hand partner who is not very bright. He can also disguise himself as a humble old man. He also has a not-so-secret crush on Arukenimon herself. He is a supporting antagonist in Digimon Adventure 02.

Mummymon is an Ultimate Level Digimon that resembles a mummy. He has a large gun, braces on his legs, claws on his hands and feet, and spikes on his body. He also has a second form of a one-eye gentleman with a cane.

Mummymon first appeared during the fight with Arukenimon and Paildramon. He defeated the Digidestined and came to Arukenimon's rescue, and the two villains retreated. Most of the time throughout of the episodes, Mummymon is not very bright and very dim-witted.

During the Christmas holiday, Mummymon lured 20 children to Oikawa to implant copies of Ken's Dark Spores into while Arukenimon opened numerous Digi-Gates to keep the Digidestined occupied worldwide. Though learning of his origins, Mummymon focuses his achieving his creator's goals along with Arukenimon. But in the end, after MaloMyotismon kills Arukenimon in the world of dreams, Mummymon became furious and attempted to avenge his partner's death and attacked MaloMyotismon, but was melted away by MaloMyotismon's Crimson Mist, killing him as well.

Mummymon is a Digimon that takes residence in the history museum, abducting any fatigued people near the building to mummify. When Hiro and Gammamon face him, it is revealed that Mummymon sees himself as a doctor that just wants make people feel better and he thinks that the mummification is the best way to do so, since he saw the process in an hologram. He overwhelms Hiro and Gammamon before the latter digivolves into BetelGammamon and defeats. After the battle, Hiro convinces Mummymon that his method was wrong and makes him free all the people he kidnapped. Mummymon is then convinced by Hiro to learn how to help humans by going to to a hospital, often providing his skills in helping Hiro and group in medical-related situations.

An Undead type Digimon whose body is covered in bandages, like the mummies of Ancient Egypt. Because he is able to summon and manipulate the souls (residual data) and wills of Digimon during their time of deletion, he is nicknamed the "Necromancer". He defeats his cornered enemies by first battling them thoroughly with his brandished arms, before firing his favorite "Obelisk" machine gun at random, although he doesn't let others see what he thinks about easily, because he seldom shows his expressions. His "Snake Bandage" attack allows him to expand the bandages from his arms like snakes and throttle the enemy with them. His special attack is "Necrophobia", which summons ghosts to drive the enemy mad until it dies. 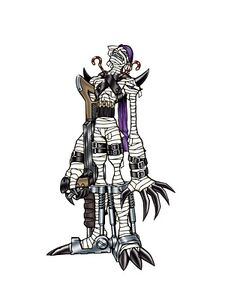 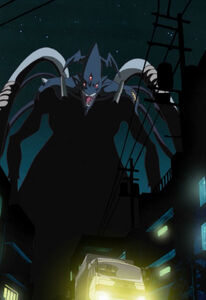 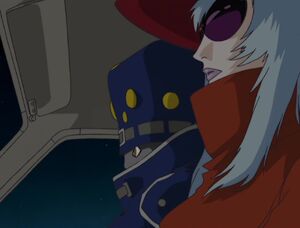