Mundus' Spawn (also called "Mundus Spawn"), sometimes known as "Spawn of Mundus", is a demonic creature that is the biological child of both Mundus and Lilith. He resides within Lilith's womb and frequently reacts while inside her womb. He serves as a boss alongside its mother in the Last Dance mission in DmC: Devil May Cry.

As Dante fights his way to the end at Limbo City's popular night club, he finally catches up with Lilith and challenges her to a fight. Lilith abides and Mundus' spawn, true to its name, spawns from Lilith's body.

After the spawn is defeated, Lilith is left undefended and is held hostage by the two Nephilims. Dante suggests to counter the earlier offer of Mundus of trading Kat for Dante, instead offering the safety of Mundus' child in trade for Kat. During the trade, a heavily armed squad is dispatched by Mundus to make sure that the trade would go smoothly. However, Vergil shoots at Lilith, killing her and, ultimately, Mundus' spawn. 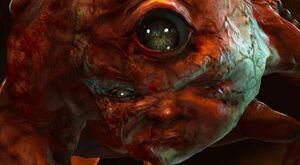 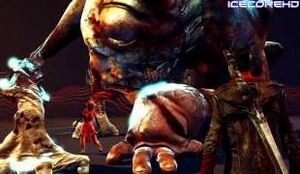 Lilith along with her "love child" battles Dante.
Add a photo to this gallery

Retrieved from "https://villains.fandom.com/wiki/Mundus%27_Spawn?oldid=4142953"
Community content is available under CC-BY-SA unless otherwise noted.