Killing his own failed servants.

Devour the Qliphoth Fruit.
Acquire divine powers and become a God-like being.
Rule over the Demon world.
Invade earth.
Spread his demons across the human world.
Kill Eva to lure Sparda and kill him (all succeeded).
Get free from his confined prison.
Conquer mankind and rule all of Earth.
Seek his revenge against Sparda's descendants (all ongoing).
Brainwash Vergil into his personal right-hand man and strongest servant, Nelo Angelo (succeeded until his death).
Kill Dante (failed).

Mundus (in Japanese: ムンドゥス Mundusu, Latin for "world"), also known as the Dark Emperor, the Devil King, the Prince of Darkness and Master Mundus, is the overarching antagonist of the Devil May Cry video game franchise.

He was originally defeated by the legendary Dark Knight Sparda after the great demon had a change of heart, then betrayed and fought the entire armies of the demon world for the sake of the human race. Then centuries later, Mundus was yet again defeated, only this time by Sparda's own son Dante. Mundus is the source of evil responsible for the events in the Devil May Cry franchise. He is sole responsible for the death of Dante and Vergil's mother, Eva, and the corruption of Vergil.

He is the ruler of the demonic underworld and the arch-nemesis of the Legendary Dark Knight Sparda and later his sons, Dante and Vergil.

He was voiced by Tony Daniels.

Mundus appears in a variety of forms throughout Devil May Cry.

The first form is a trio of glowing red eye-spheres arranged in a triangle. It is unknown if this is a transformation or simply an avatar of himself. This avatar of Mundus possesses the powers to manipulate and summoning lightning.

The second is that of a gigantic statue of a celestial winged young man with three eyes and long hair. He may lack mobility in this form, but Mundus makes it up with his power. Able to generate 3 deadly energy spears out of his eyes, and an energy beam that can be fatal.

Fallen Angel Form (The real one)

The third form transforms Mundus into an older version of himself. In this form, Mundus acquires a beard, angelic wings, and a large hole in his chest, which is most likely a scar from his battle with Sparda so many years ago.

In his final battle with Dante, the stone on his body is continually blasted away, revealing his true form, which is a writhing lovecraftian-like creature made from body tissues with three eyes and a mouth on stalks, along with dozens of hands sprouting from his facial area. Upon his defeat, Mundus turned into an ethereal avatar of his head before being sent back to the demon world.

Life before Devil May Cry

Little is known about Mundus's past, except that he lead an invasion of the human world 2,000 years ago until he was betrayed by one of his chief generals, Sparda, who managed to defeat both Mundus and his army and sealed them all back into the Demon World.

At the end of Devil May Cry 3, Vergil encountered Mundus while he was in Hell. Vergil thought that if his father could defeat Mundus, so could he. However, Mundus easily defeated Vergil. He then decided to corrupt Vergil, by transforming the half-demon into an alternate Devil Trigger; Nelo Angelo.

Mundus eventually planned his escape back into the human world by creating a gateway inside a castle on Mallet Island. He later used his minion, Trish, a demonic clone of Dante's mother; Eva, to draw Dante, the son of his old enemy, Sparda, there so he could kill him at the same time. After Dante managed to reach Mallet Island, Mundus sent an army of powerful and loyal demonic servants to kill Dante, only for each of them to fail, multiple times. After Griffon was defeat by Dante for the third time, he begged Mundus for another chance. But Mundus replied by killing Griffon in cold blood.

After Dante managed to defeat Nightmare for a third time, as well as rescue Trish from falling debris, Mundus told Trish that he was disappointed with her. So when Dante was about to confront the Dark Emperor in his throne room, Mundus held Trish hostage. Mundus threaten Dante that if he even blinks, she died. Mundus then shoots three energy spears right at Dante. Just when he was about to kill Dante, Trish intercepted, taking the fatal blow.

The two engaged in a titanic battle, with Dante unleashing the Devil Trigger of his father's sword in its true form, the visage of Sparda. He finally succeeded in defeating Mundus, but as he attempted to escape Mallet Island, the Dark Emperor opened a rift and engaged Dante in a final battle. As Dante was shooting down Mundus, Mundus began to crumble apart, revealing his hideous true form. Just when Mundus was about to kill Dante, Trish, who survived the fatal blow, appeared and gave Dante enough power to defeated Mundus. With the defeat of Mundus, Dante managed to drive Mundus back into the demon world. However Mundus swore that he would return, in which Dante replied to him by giving his regards to his son.

Mundus has been mentioned in the Devil May Cry 5 prequel novel, still sending demons after Dante.

In the videogame DmC: Devil May Cry, Mundus who is the game's main antagonist, much different and hides behind his human disguise by the name "Kyle Ryder" and he is the absolute ruler of the twisted demonic world of Limbo. In the game his war with angels as well as the human world he seeks to conquer was over 10,000 years ago and both he and the demons have been secretly living among an unsuspecting mankind and controlling the entire Earth, but he was stopped and vanquished in the end by both part angel/part-demon brothers Dante and Vergil, the sons of Mundus' blood-brother and former lieutenant, the great demon warrior Sparda.

Mundus is depicted as the epitome of evil within the Devil May Cry universe. He is very unscrupulous, temperamental, uncompromising, and manipulative, so he has no loyalty or compassion for his minions, ruthlessly killing one of his own generals, Griffon, after he failed to defeat Dante and pleaded for his master's aid, or even using Trish as a bargaining chip over Dante to ensure an easy victory, which could be seen as cowardly. Like most other demons in the series, Mundus has a low opinion on humans, even going so far as to wonder if Dante's human heritage had weakened his father's blood.

Though he hates Sparda, he did note he could see the same "light" from Sparda's eyes in Dante's, which could indicate a measure of respect he once held for his greatest general, though this could also simply be a fallback reference as to how both Phantom and Griffon saw Sparda within Dante. Mundus is also very driven by his goals, setting servant after servant to destroy Dante before finally taking the fight to the devil hunter himself. And even after losing again, he still forced a smaller Hellgate open in a bid for vengeance on Dante. 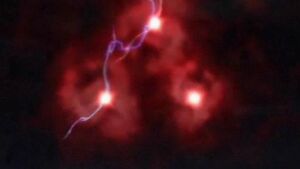 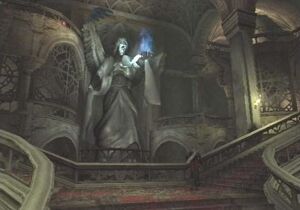 The statue of Mundus in his youth and appearance as a young three-eyed angel at the Castle of Mallet Island. 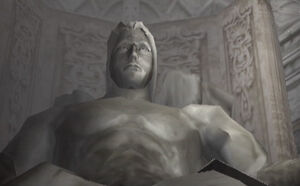 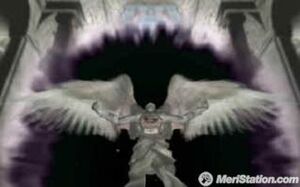 Mundus setting the stage for his battle with Dante. 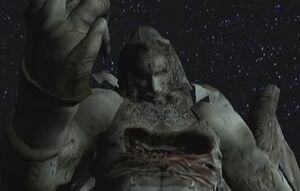 Mundus in his true and mature form as an older bearded angel with a hole in his chest. 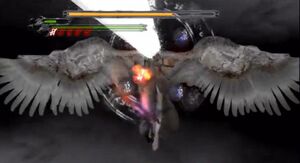 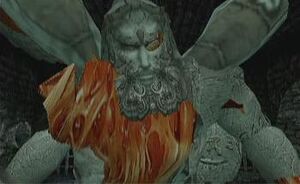 Mundus in his almost blob-like form while seeking revenge against Dante. 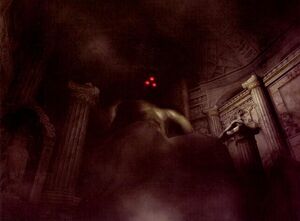 Mundus, the Dark Emperor of the Underworld. 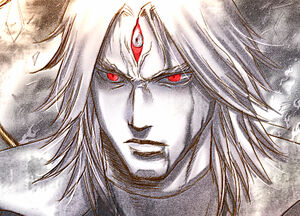 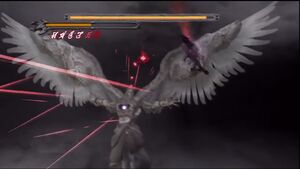 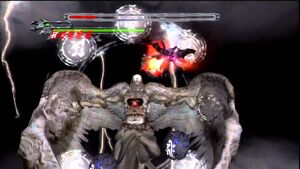 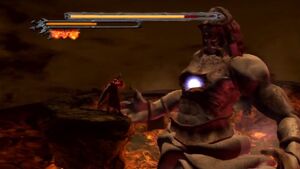