God (a lie due to Mundus' own egoistical personality)

Ruler of the Demon World

Often referring himself as a god.

Being worshipped by his demon minions including Bob Barbas.

To rule both the Demon World and the Human World.

Mundus (pronounced "Mon-dus") is a powerful and malicious demon king and the main antagonist of DmC: Devil May Cry. He rules not only the demonic realm Limbo itself, but also Limbo City on Earth where he disguised himself as a powerful and wealthy banker named Kyle Ryder and watches the demon-infested metropolis through the CCTV system connected to a wall of video monitors within his large office.

He was voiced by Louis Herthum.

In his human form, Mundus is a tall, bald man with a scarification tattoo of a third eye on his forehead, and he wears a dapper suit with gold pins on the shoulders. His gray eyes glow in the dark, his right one lacks a pupil, and he has a scar on his lower lip and chin. Mundus often speaks menacingly to a video image of Dante as he watches his exploits throughout the city.

When confronted by Dante, Mundus takes on the form of a hellish, pitch-black humanoid giant with the size and complexion of his human disguise, whose body is covered with silver lines and cracks.

A mighty demon named Mundus is the leader and master of the demonic forces, having wrested control over 9,000 years ago. His most trusted ally was none other than his own lieutenant and blood-brother, Sparda. However, Sparda fell for an angel named Eva, and their union conceived the two Nephilim Dante and Vergil. This act enraged Mundus greatly and he vowed to find them. Invading their Paradise mansion, he killed Eva by ripping out her heart. As for Sparda, Mundus banished him into eternal suffering and pain. He never found their children as Sparda hid them safely amongst the humans. Also, Mundus believed that Dante was their only son, never learning of Vergil's existence.

He lords over Limbo City from a seat of power in both the demonic realm, and the human world, where he operates under the guise of "Kyle Ryder", a banker who uses Raptor News Network's propaganda to portray himself as a philanthropist. Despite the good public face he shares, he is quite ruthless, operating his business more like a loan shark than a banker, never giving extensions, and reinforcing repercussions for late customers, He runs his financing business as CEO of the world's most powerful investment bank called Silver Sacks Investors at the heart of Limbo City from the Silver Sacks Tower. His main goal is to achieve  total control of the human world through debt.

After Dante's battle with the Hunter  at the pier is reported on the news, Mundus smirks, saying that it is only a matter of time, confident that he will kill the Nephilim. However, things change later on as Dante joins forces with his brother Vergil and The Order. While having sex with his mistress, Lilith, Mundus senses the death of his succubus, Poison. He becomes enraged as he realizes that Dante was the one who killed her. With Poison gone, Mundus can no longer keep humans docile with the Virility drink. Soon afterwards, Dante takes out the Raptor News Network by killing Bob Barbas. Without the network, Mundus cannot monitor the humans anymore. But the demon king still has the upper hand, as his SWAT finds and raid's The Order's hideout, killing most of the members.

When Kat is captured by SWAT, Mundus has her tortured for information. He then sends a video message to Vergil, demanding that he trades Dante for the girl. However Dante kidnaps Lilith and sends a video back to Mundus, giving a counter proposal for the trade: Kat for his child. Mundus becomes furious with his child in danger, but agrees and has Kat brought to the docks by a SWAT team. He watches from his tower as the women walk towards their respective sides. But Mundus is enraged when Lilith and their child are killed by Vergil. Drawing power from the Hell Gate, he erupts the city, dragging Dante, Vergil and Kat into Limbo. But they manage to escape, and he becomes weakened due to his outburst.

Later on, when Dante approaches the front of the Silver Sacks Tower, Mundus comments that he is just like his father, too big for his boots. He then drags the Nephilim into Limbo and has his demon army attack him. But Dante fends them off and ascends the towers with Vergil, who overrides the security programs in the human world. Mundus and Dante finally face each other in person in the demon king's office. Mundus then asks why Dante killed his child, and the Nephilim answers that he did it for mankind's freedom. The demon king questions the answer, reasoning that before he ruled over them, humans were abusing their freedom by starving, fighting and killing each other. Dante then changes his answer, saying that he killed Mundus' child for revenge for the murder Eva. As the Nephilim claims that he enjoyed watching the child's gruesome death and even saying hearing Mundus screaming like one of his "demon bitches", saying it is priceless, the infuriated demon king blasts him out of the office. He then grabs Dante and zooms out of the Silver Sacks Tower, landing on a nearby roof. Pinning him down, Mundus drives his fingers into Dante's chest, digging for the heart. But back at the tower, Vergil closes the Hell Gate cutting off Mundus' power, and Limbo is merged into the human world. As he realizes that the Hell Gate is shut, Mundus is stabbed in the back by Vergil, who tells him to leave his brother alone. Dante then pushes Mundus off of the roof, spitting on his face as he lands on the car below.

However, Mundus rises again, using debris to form a gigantic humanoid. Now realizing that there are two Sons of Sparda, the demon king attacks them. But the brothers fight back as Dante distracts him while Vergil tries to open his third eye. When Mundus knocks Vergil, Dante unleashes his Devil Trigger, allowing Vergil to slash and open the third eye. Mundus is then brutally punched in the face by Dante, but he pulls the Nephilim off his face and slams him an a nearby building, rendering him unconscious. After Vergil saves Dante, they see that Mundus is showing cracks, and his true body that contains his soul is at the core. However the demon king attacks them again, sucking Vergil into the core. While Mundus's true body fights Vergil, the colossal shell battles Dante. But after destroying the arms and pulling out the eyes, Dante weakens the shell and rushes inside. After being kicked off by Vergil, Mundus is sliced by Dante. As the brothers escape together, Mundus' body explodes and his shell falls.

With the demon king dead and the Hell Gate closed, Limbo has now emerged with the real world and the humans now see that demons are real.

Mundus is ruthless, cruel, arrogant, manipulative and egocentric, even for a demon. He has many megalomaniacal tendencies, and often refers to himself as a blasphemous god. To further fuel his ego, he has demon followers who believe him to be a god as well, such as Bob Barbas.  He does, however, seem to show attachment to those who help further his agenda/are related directly to him.

This is evidenced when the Succubus, his mistress Lilith, is killed and mostly with the spawn of Mundus, as he shows extreme anger to it being threatened, killed, and its death brought up.

Mundus also has a penchant for devouring hearts, especially from victims as he did to Eva, Sparda's wife and the angel mother of both Dante and Vergil in Dante's childhood, and threatened to do so again to Dante when the two later meet. 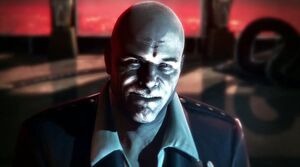 Mundus in his human form as Kyle Ryder. 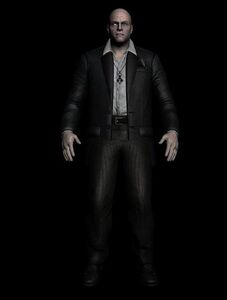 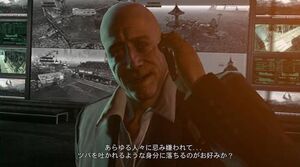 Kyle Ryder (Mundus) talking on a cellphone while watches everything in Limbo City from the cameras of the CCTV system connected to a wall of video monitors in his large office. 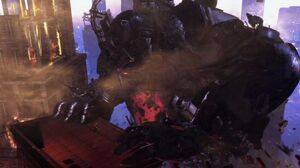 The true form of Mundus. 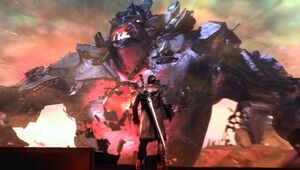 Mundus in his true form soon face off against Dante who beaten him in the end. 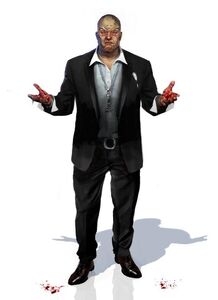 Kyle Ryder aka Mundus
Add a photo to this gallery

Retrieved from "https://villains.fandom.com/wiki/Mundus_(DmC)?oldid=3705028"
Community content is available under CC-BY-SA unless otherwise noted.