Mungus is the prince of the Mammoth Tribe with an icy trunk and a character in the videogame Legends of Chima.

Mungus is the younger brother of Mottrot and son of Maula. He is the biggest of the Ice Hunters where it took three Chi Orbs to reawaken him from his frozen sleep. Mungus is strong enough to flip over Rogon's truck as seen during the Ice Hunters' first fight with the Tribes of Chima. He is very childish as seen with him playing in the snow and making snow angels. Despite Mungus' childish ways, Maula favors Mungus more than Mottrot. Mungus is sweet, friendly, and happy all the time....unless Maula tells Mungus to attack something in which case he charges forward and crushes it flat.

Later Rhino tribe and Mammoth tribe forget for a moment of war, and playing in the snow. After the Great Illumination Mungus and the other members of the Ice Hunters were improved, and then the Chima was saved again. 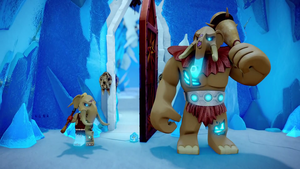 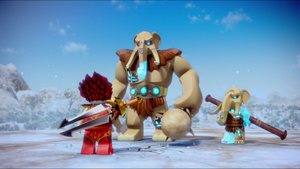 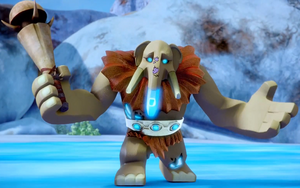 Mungus Animated
Add a photo to this gallery

Retrieved from "https://villains.fandom.com/wiki/Mungus?oldid=3727422"
Community content is available under CC-BY-SA unless otherwise noted.