Murakami is the main antagonist of the Max Steel Reboot episode "Live by the Sword". He is a skilled swordsman. In the past, he desired to rule the world and wanted a strong sword to help accomplish that goal. He got a sword made by a forger but the forger put a curse on it which sealed Murakami in the sword. He later returned in the present episode when he took possession of one Max McGrath's friends, Kirby Kowalski to resume his mission.

Murakami only cares for taking over the world and sees himself as the only person capable of taking on that feat by himself. He is very prideful for being a strong swordsman and has no loyalty to anyone but himself.

The Sword first appeared when a person put a sword into Kirby's bag. He touched the sword and he immediately took possession of Kirby. Murakami appeared in alley where Bartholomew and his friends were about to attack him for being in their spot. Murakami instantly defeated them and proceed to go on a rampage throughout Copper Canyon. A cop tried to stop him but Murakami sliced up his gun and scared him off. Max Steel later found out that his friend was possessed by the sword by a story by the vendor. Max Steel found Murakami in the city and fought him. He defeated him but Jason Naught came and kidnapped him.

Naught wanted Murakami for the sword he held with him. But Murakami had no interest in what Naught wanted. He ended up attacking Naught and his men. Max Steel then came to stop Naught as well and save Murakami. Murakami ended up fighting Max Steel and putting up a challenge for him as well. Naught was held back in a fight with Berto's C.Y.T.R.O robot. Naught was defeated by C.Y.T.R.O. Max Steel eventually defeat Murakami when he realized that a sword with T.U.R.B.O energy would be able to break the sword. With Murakami's defeat, Kirby was released from his control. 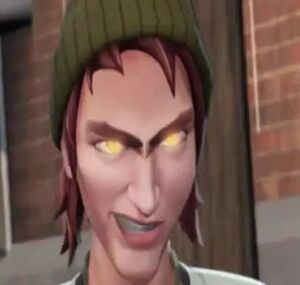 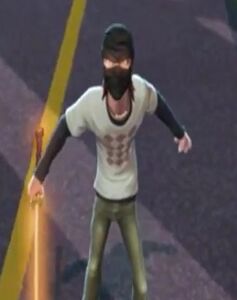 Murakami fully possessing Kirby.
Add a photo to this gallery

Retrieved from "https://villains.fandom.com/wiki/Murakami?oldid=3890942"
Community content is available under CC-BY-SA unless otherwise noted.