The Murder Machine (real name Bruce Wayne) is a villainous version of Batman from the DC Comics universe. He is a member of the Dark Knights, a group of vigilantes from the Dark Multiverse whose goal is to assist the deity Barbatos to plunge the central DC Multiverse into darkness.

The Batman of Earth -44 suffered a terrible loss when a group of his adversaries led by Bane broke into the Batcave and brutally murdered Bruce Wayne's faithful butler and father figure, Alfred Pennyworth. As Bruce mourned with other members of the Justice League over his death, he asked Cyborg to help him finish the Alfred Protocol; a digital copy of Alfred’s mind that Bruce hoped to turn into artificial intelligence.

However, after it's completion, the Alfred Protocol began to react hostile towards anyone other than Bruce Wayne and soon started killing all of Batman’s enemies. Cyborg told Bruce that they need to destroy the A.I. before it could harm anyone else, but Bruce responded that the A.I. was just trying to protect him and wanted to see if he can reason with it first, as he doesn't want to lose Alfred again.

Unfortunately, Bruce was unable to stop the Alfred Protocol which assimilated with him, taking away his feelings, fears, and humanity as he was converted into a cybernetically enchanted version of Batman. Batman used his new form to slaughter various criminals before turning his attention to the Justice League, who were no match against his new abilities and killed without remorse. Eventually, Earth -44 began to fall apart, so Batman got into contact with The Batman Who Laughs who made him a member of the Dark Knights and became known as The Murder Machine. 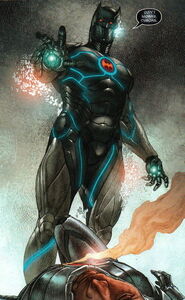 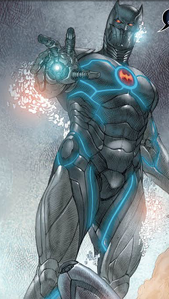 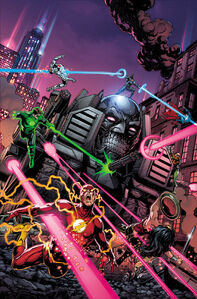 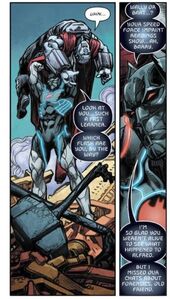 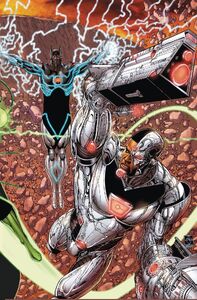 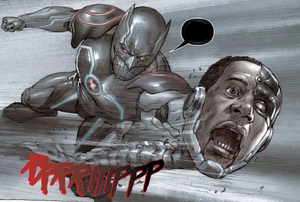 Murder Machine kills Cyborg (of Earth -44).
Add a photo to this gallery

Retrieved from "https://villains.fandom.com/wiki/Murder_Machine?oldid=3379574"
Community content is available under CC-BY-SA unless otherwise noted.