The Call of the Wild: Howl Buck

Kill Thornton and his friends and rob their gold.

The Murderers are the final antagonists of the 1981 anime film The Call of the Wild: Howl Buck. They are a trio of murderous criminals who kill John Thornton and his friends and want to kill Buck.

They were voiced by Steve Cramer and Tom Wyner in the English version.

After Buck and his pack successfully hunt an elk, he hears gunshots coming from Thornton's camp. Buck arrives and discovers that Thornton and his friends have been killed and howls in sadness.

Buck finds the murderers and attacks them. The murderers try to shoot at Buck, but Buck was too fast. One of the murderers tries to climb up a cliff to get away. However, Buck grabs onto his leg, causing him to fall off to his death. 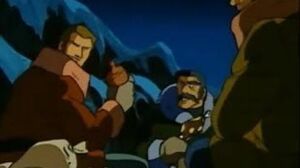 Retrieved from "https://villains.fandom.com/wiki/Murderers?oldid=3400545"
Community content is available under CC-BY-SA unless otherwise noted.