Leader of the Black Witches

Terrorizing local villages.
Abducting children to use for the Blood Moon Sabbath.

Sacrifice Gretel and the twelve children on the Blood Moon Sabbath to gain an immunity to fire (failed).

Muriel, also known as Muriel the Grand Black Witch, is the main antagonist of the 2013 dark fantasy horror action film Hansel & Gretel: Witch Hunters. She is the leader of the Black Witches and the arch-nemesis of Hansel and Gretel.

She was portrayed by Famke Janssen, who also played Rachel Wright in I Spy, Xenia Onatopp in GoldenEye and Dark Phoenix in the X-Men films.

Muriel was a powerful Grand Black Witch who sought an immunity to fire. In order to do so, she needed to sacrifice the heart of a Grand White Witch in a ritual sacrifice on the Blood Moon Sabbath. Muriel plotted to use the young Gretel as the sacrifice, but feared her and Hansel's mother, Adrianna, the Grand White Witch. Muriel would proceed to expose Adrianna as a witch to the village, leading to her and her husband being killed by the townsfolk while Hansel and Gretel were hidden away in the forest. However, in spite of this, the Blood Moon Sabbath had already passed, foiling Muriel's plans.

Many years later, during which Hansel and Gretel had become famed witch hunters, Muriel conspired with the witch coven to resume their plans to gain an immunity to fire. They terrorized the town by abducting twelve children to use for the Blood Moon Sabbath. The kidnappings prompted the mayor to hire Hansel and Gretel to rescue the children. However, Sheriff Berringer paid a group of hunters to venture into the forest with the same goals.

Muriel soon came across the hunters in the forest. Upon the hunters revealing their intentions of rescuing the children, Muriel unveiled her true form and had the hunter's own attack dogs maul them to death. Muriel cast a spell on one hunter, allowing him to return to the town. Upon entering the tavern, however, the man exploded; Muriel intended to use this as a warning to the town.

After this, Muriel and the other witches tested the potion on a captured boy, murdering him and boiling him down into the potion. The potion temporarily made the Horned Witch immune to fire, but the spell eventually wore off. Some time afterwards, the Horned Witch was captured by Hansel and Gretel. Despite being captured, the Horned Witch managed to telepathically communicate with Muriel, prompting her to arrive at the town with the Red-Haired Witch and a troll, Edward, to rescue her and find the final child. Muriel set fire to a section of the town and confronted Gretel, easily subduing her. Muriel spared her, however, needing her for the Blood Moon Sabbath, and merely knocked her unconscious. Muriel then proceeded to kill a guard, Jonathan, via forcing him to kill himself with his shotgun. In the midst of the chaos, the final girl was captured by Edward.

In the aftermath of the destruction, Muriel confronted Hansel and Gretel when they reunited at their childhood home. Muriel revealed to the siblings their past, explaining that Gretel herself is a Grand White Witch. Following the revelation, the siblings attempted to fight Muriel, but she easily subdued both of them, stabbing Hansel and abducting Gretel for the Blood Moon Sabbath. However, Hansel was healed by Mina, a witch who he had earlier fallen in love with. Along with aspiring witch hunter Benjamin "Ben" Walser, the two set off to stop Muriel.

Muriel invited witches from across the world to take part in the Blood Moon Sabbath. The witches took Gretel and the abducted children, intending to sacrifice them and gain immunity to fire. As Muriel prepared to kill Gretel, however, the witches were ambushed by Hansel, Mina and Ben. Unknown to Muriel, the group had discovered a grimoire written by Adrianna that had provided them with the means to create a potion that enchanted their weapons and left the wards used by Muriel and her coven useless. The huge gathering of witches quickly turned into a massacre, with the witches having no defense against the heroes' enchanted weaponry and unable to mount a defense or run away. Edward turned on Muriel in favor of rescuing Gretel, who had been kind to him, leading Muriel to knock him off a cliff. In the midst of the chaos, Gretel was freed and took part in battling the witches. As the children were rescued and the witches were slaughtered, Muriel fled into the forest. However, she was knocked off her broom by Ben. While Hansel, Mina and Ben pursued Muriel, Gretel remained to revive Edward.

Muriel arrived at the Gingerbread House, where Hansel and Gretel killed their first witch. Muriel easily incapacitated Mina and held Ben hostage. As she prepared to kill him, however, Hansel shot Ben in the shoulder, prompting Muriel to release him. Mina recovered and attempted to defend Hansel, but she was overpowered and fatally wounded by Muriel. Hansel shot Muriel repeatedly, knocking her into the cabin, and comforted Mina in her final moments, before proceeding to battle Muriel. Gretel joined Hansel in their battle against Muriel, and the two managed to overpower her. Ultimately, the siblings killed Muriel by decapitating her with a shovel. The siblings then proceeded to throw Muriel's head in the oven.

Muriel was shown to be sadistic, ambitious, manipulative and brutal, especially as she attempted to gain an immunity to fire. She would often brutally dispose of humans, which she viewed as inferior to witches. She appeared to be a rather egocentric individual, claiming that she went by many names, none of which Gretel was worthy of pronouncing. However, she also appeared to show a cowardly side, fleeing after the Blood Moon passed and attempting to beg for mercy from Hansel, prior to her death. She would gleefully murder any humans who got in her way, or to further her own plans.

Muriel seemed to regard the other witches as her sisters, particularly the Horned Witch and the Red-Haired Witch. However, she regarded White Witches with contempt, claiming that Mina was pathetic for sacrificing herself for Hansel. 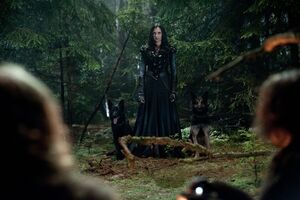 Muriel appearing before the trackers. 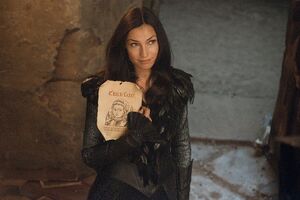 Muriel with the invitation. 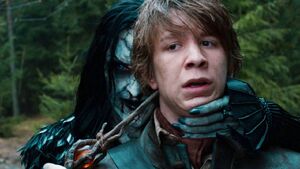 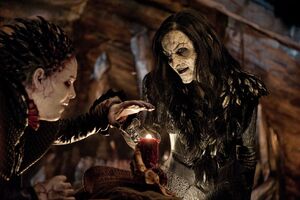 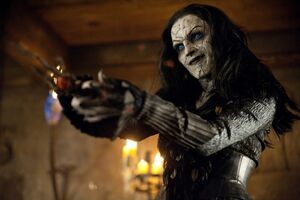 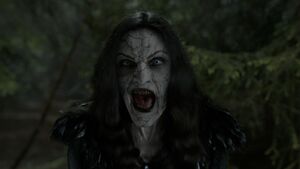 Muriel in the forest, 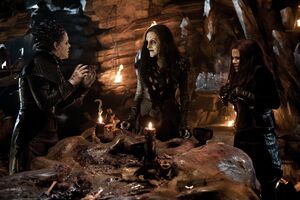 Muriel with the Horned Witch and the Red-Haired Witch. 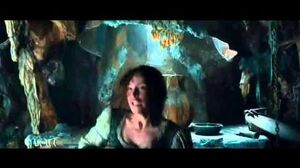