Murloc High Sorcerer (only in the demo)

Kill Thrall and prevent others Orcs and Trolls to escape from the sanctuary (failed).

The Murloc Sorcerer is a minor antagonist of the Warcraft video game franchise and the secondary antagonist of the Warcraft III video game demo and the video game's expansion Warcraft III: Frozen Throne's Custom Campaign Exodus of the Horde. It is an orange Murloc who is the leader of a band of Murlocs living on an unnamed island and capturing Orcs, Humans and a tribe of Trolls known as the Darkspears in order to sacrifice for a Naga Sorceress named Zar'Jira.

While Thrall and the Orcs managed to rid the front man of the Humans for peace with the Darkspear Trolls on the island, the witch Zar'Jira ordered to his Murloc to sacrifice everything they found on the island (including Orcs, Humans and the Darkspear Trolls) and he tells the hostages that their pitiful magic will never end and take the Orcs, the Humans and the Darkspear Trolls into the depths of the sanctuary, a young troll explained the voice of reason to Thrall that all the Murlocs' island have begun worshiping a Naga Sorceress named Zar'Jira, we know that he lives under the sea and if the murlocs do not make the regular sacrifices, she will destroy all over the Island, Thrall has know the troll's reason, escaping from the cell with him by killing two green Murlocs guarding the cell where they keep Thrall and the captive troll.

Meanwhile, after Thrall has released many orcs and many trolls to avoid the witch's sacrifice, a grunt sees that Sen'Jin has been captured by the Murlocs, he is trying to save him, but they are too many and they say that they will sacrifice Sen'Jin for Zar'Jira, Thrall has no choice, he ordered his soldiers to save Sen'Jin, but a Shaman told Thrall that the sacrificial room is guarded by three Murlocs Guardians managed to sacrifice Sen'jin, the Murloc Sorcerer kills savagely Sen'Jin, Thrall, furious at seeing Sen'Jin's sacrifice, was immersed in a huge anger and with his Orcs and the Darkspear Trolls he rescued, leading an atrocious carnage and killing all the Murlocs (including the three Murlocs Guardians), Thrall gave the final blow by killing the Murloc Sorcerer at once, lightning of his hammer, promising him an unforgivable death for Sen'jin. After the Murloc Sorcerer's death, Sen'jin dreamed of a vision (he told Thrall to save his troll tribe), while the witch's sanctuary began to crumble, Thrall understood the vision of the chief of the Darkspears tribe, but Sen'jin dies peacefully, Thrall will unite with all Orcs and all Darkspears Trolls and start escaping from the shrine that is falling apart, as they escape from the sanctuary, Zar'Jira told the Orcs to make your prayers to the gods and not to escape the currents of death, the grunt never knew where the voice came from (but it was Zar'Jira), Thrall has no idea, but he forces the Orcs, the Trolls and himself to escape from the sanctuary to reach the surface. 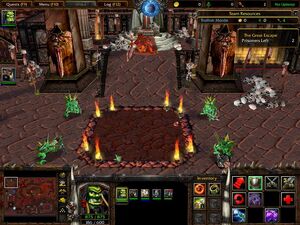 The Murloc Sorcerer on his throne. 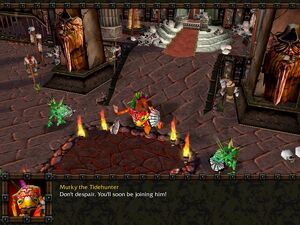 The Murloc Sorcerer after sacrificing Sen'Jin. 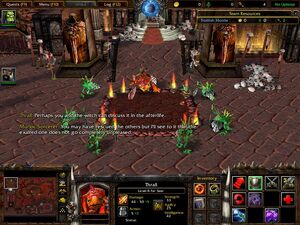 The Murloc Sorcerer explaining to Thrall if he did not release the entire Horde.