Brainwashing and drugging children to be his followers.

Spreading the ideology of Blue Cosmos.

Wipe out all Coordinators to create a more "pure" world.

Muruta Azrael is one of the main antagonists of the anime Mobile Suit Gundam SEED. He is the leader of the Blue Cosmos terrorist group, which feels that all nations of Earth, neutral or not, should fight against humanity's "enemies", the Coordinators, for the sake of a "blue and pure world" - that is, a world without Coordinators. His relative Bruno Azrael is a member of Logos.

He was voiced by Nobuyuki Hiyama in the Japanese version, and by Andrew Francis in the English dubbed version.

Not much is known of Muruta's past. As a child, he was bullied by Coordinator children, who decided to flaunt their abilities towards the Natural Muruta. Confronting his mother over why he wasn't a Coordinator, he was slapped and told that she would never have a child be "a monster" like that. Through this, his hatred of Coordinators grew. The years would pass and soon, Muruta would become head of Blue Cosmos.

After receiving information from Rau Le Creuset on the true target of Operation Spitbreak, he and his subordinates arrange to place a Cyclops System beneath the JOSH-A Alaska base. They also arrange to leave Eurasian Federation troops for base "defense", while the Atlantic Federation personnel are transferred to Panama. The personnel are left for "defense" to convince ZAFT forces to move close to the base so they will be destroyed by the Cyclops system, crippling ZAFT's fighting strength. This destruction of Eurasian Federation troops also allows Blue Cosmos (which Azrael controls) and the Atlantic Federation to dominate the Earth Alliance.

Unfortunately, the Alliance's victory at JOSH-A was only Pyrrhic with the loss of the Panama mass driver, threatening to deplete the stores at their lunar bases. Azrael convinces the Alliance leader to "request" the Orb Union for use of their mass driver, since it's the only remaining one not under ZAFT's control. He leads the attack on the Orb Union when Uzumi Nara Athha, as he had hoped, refuses their "offer." In the attack, he uses the new GAT-X131 Calamity, GAT-X252 Forbidden, and GAT-X370 Raider, as well as massive numbers of the mass-produced GAT-01 Strike Dagger. Despite the interference of the ZGMF-X10A Freedom and ZGMF-X09A Justice Gundams, Azrael's forces overwhelm the defenses. Seeing how much resistance Orb was putting up, Azrael commented that its better if they just "disappear." Uzumi Nara Athha orders all remaining Orb forces into space before destroying the mass driver to prevent the Earth Alliance from using it, killing himself and many Orb officials in the process, giving Azrael nothing but another Pyrrhic victory.

Azrael soon takes an interest in the Freedom and Justice units, suspecting that they run on nuclear energy when he notices that the power they displayed is greater than other mobile suits.

After the Earth Alliance recaptures the mass driver at Victoria, Azrael decides to go into space on board the Dominion with the three Biological CPU pilots to capture either the Freedom or Justice for the Earth Alliance. He meets with its captain, Natarle Badgiruel, who was previously the XO of the rogue Archangel. Azrael saw that her familiarity with the ship will enable them to destroy the Archangel. They attack the Archangel, but are driven back by the Freedom and Justice units and the appearance of the Kusanagi and Eternal.

Azrael takes interest in a life pod Le Creuset sent to the Earth Alliance after its occupant, Flay Allster, mentions that she had the "key" which would end the war. After the Calamity retrieves the pod, Azrael discovers that the "key" is in fact a data disk containing schematics ZAFT's N-Jammer Canceller technology allowing him to exit the battle with his primary objective fulfilled. He convinces top Earth Alliance officials to use nuclear weapons with N-Jammer Cancellers to end the war by eradicating all of the Coordinators, instead of using the technology to solve the Earth's energy crisis. The Alliance forces then mobilized for the final battle against ZAFT. The bulk of the Alliance fleet engaged the primary ZAFT defense forces stationed at Jachin Due, while the Biological CPU units protected the mobile armors carrying the missiles. However, all missiles were intercepted by the Freedom and Justice.

As the war enters its final stages, Azrael becomes increasingly desperate to accomplish his goal of genocide, especially after witnessing the destructive power of GENESIS and gives the orders to target the civilian PLANTS to inflict the maximum causality rate to eliminate the threat to Earth rather than stopping GENESIS. When Natarle objects to these orders, Azrael pulls a gun on her, frightening the other Dominion crew members into submission. When the Archangel came into view, he ordered Natarle to destroy the ship full of traitors once and for all. However, Flay Allster alerts the Archangel of the impending danger as the Dominion prepares to fire on it. When Azrael prepares to shoot Flay, Natarle intervenes, restraining him and ordering the rest of the crew to abandon ship. Azrael shoots Natarle during the struggle and then prepares to destroy the Archangel himself. When he fires the "Lohengrin", however, Strike pilot Mu La Flaga takes the full force of the blast and saves the Archangel, seemingly perishing in the process. Azrael is shocked that he lost while Natarle laughs at him. In response, the Archangel destroys the Dominion, vaporizing Azarel (screaming in horror that he's going to die and lose the war) and Captain Badgiruel (bravely accepting her demise to defeat him) in the process.

While Azrael was already dead and only appeared in flashbacks, he does have a relative by the name Bruno Azrael who is a member of Blue Cosmos's commanding organization LOGOS. 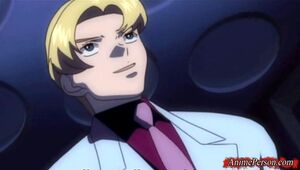 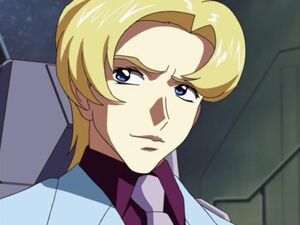 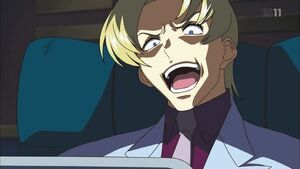 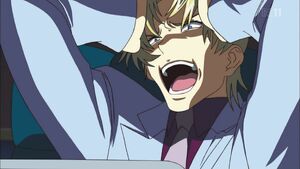 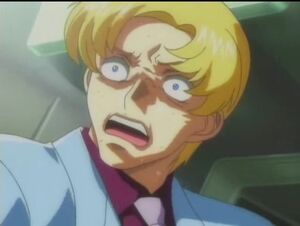 Muruta about to be vaporized. 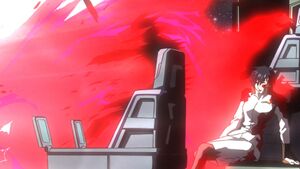 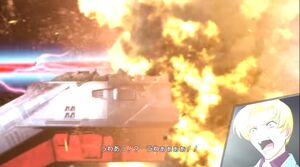 Muruta's demise in Dynasty Gundam Warrior.
Add a photo to this gallery

Retrieved from "https://villains.fandom.com/wiki/Muruta_Azrael?oldid=3921606"
Community content is available under CC-BY-SA unless otherwise noted.