Have fun killing as many people as possible with no regrets. (succeeded for a while)

Kill all of the citizens at the village (failed).
Kill Water Hose (succeeded).
Take out the U.A. students at their camp.
Kill Izuku Midoriya and Kota Izumi (both failed).
Kill Yo Shindo. (failed)

Goto Imasuji, also known as Muscular, later Jailbreaker, is a minor antagonist in the manga/anime series My Hero Academia. He is a villain affiliated with the League of Villains and a member of the organization's Vanguard Action Squad. He serves as one of the main antagonists of the Forest Training Camp Arc.

He is a psychopathic madman who is responsible for the deaths of the Pro Hero team, Water Hose. The battle left him with an enormous scar on the left side of his face. As a result, he received an artificial eye to cover the wound, as well as receive replacements, if the original were to be damaged or lost.

He is voiced by Kosuke Takaguchi in the Japanese dub of the anime, and Jim Foronda in the English dub.

Muscular is a completely cruel and sadistic man, being uncaring and ruthless towards everyone he meets and is willing to kill out of pure enjoyment and satisfaction; including innocent people and even children. He shows to have a very high level of bloodlust, with him likely joining the League of Villains only to be able to run wild and kill whomever he pleases.

Despite this though, Muscular does appear to have ideals of his own and believes that one's will is determined through their strength and abilities to accomplish what they desire. He openly admitted to not holding a grudge against the Water Hose duo for losing his eye to them, and that he just wanted to kill people with them wanting to stop him and failing, which resulted in their deaths. Because of this, he is very honest about himself and is willing to admit how strong his opponents are, if they are putting up a worthy fight for him.

While not necessarily incompetent, Muscular is quite simple minded, as he is the one that accidentally revealed Bakugo's kidnapping to Izuku Midoriya, not even being aware of it. Along with this, he is very arrogant and prideful of himself. He looks down on his opponents and enjoys taunting with them, especially those he views as weak, in which he takes pleasure tormenting them. Ironically, his arrogance would ultimately be what lead him to his defeat.

When encountering Deku again, Muscular was excited to meet him again, due to considering him a worthy opponent compared to the others which he believed to be cowards, and was excited to have a rematch with him. When Deku tried to break through to him and understand his path in life, even knowing his real name Goto Imasuji, Muscular stated that he wants to live without the regret of not having fun killing, and taunting him for sympathizing with him because he only lives for blood and violence, showing that Muscular is a truly irredeemable psychopath.

Muscular first appears in Good Evening, where he is shown to be observing the U.A. campsite, along with Dabi, Himiko Toga, and Mustard. Muscular wished to join in the action already, but Mustard advised him not to rush in, as it was not time yet. While Toga and Mustard discussed each other about their "shadowy orchestrator", Muscular cared less, as he was mainly interested in fighting the U.A. students, but was then silenced by Dabi. Eventually, the rest of the league joined up with them, and together, the squad went into action.

Once the Vanguard Action Squad spread out, Muscular went on his own where he came across the young boy, Kota. He was surprised to see him, since he was not on the list of heroes that he was given. Nonetheless, he treated him as anything but a threat, admiring his hat, and offers to trade it for his mask. Once he took of his mask, Kota immediately recognized him as the man that murdered his parents and took off, but was immediately stopped when Muscular jumped back in front of him. Muscular proceeded to attack, but missed his attack when Izuku Midoriya came to save Kota. Muscular then recognized Midoriya as one of the heroes on the list, which grew his anticipation of a battle.

Muscular proceeds to mock Midoriya for saving Kota, saying he's just like any other aspiring hero that will save everyone, no matter what. Muscular proceeds to attack, activating his Quirk and lands a hit on Midoriya, sending him straight to the wall. Muscular then asks him about Katsuki Bakugo's whereabouts, accidentally revealing the whole plan of the attack. Giving him no time to answer, Muscular immediately attacks him, sending him flying in the air then kicks him back to the wall, mocking him as he watches the young hero struggle. Midoriya attempts to attack back, but Muscular was able to block it and knocks him back away.

Muscular begins explaining how his Quirk works, in which the power of his Quirk cannot be contained by his skin. He then mocks Midoriya once more, calling him an inferior version of himself and how he's failing to save Kota. Before he could finish him off, Kota throws a rock at his head, which caught Muscular's attention. When Kota asks him if he's going to torture Midoriya the same way he did to his parents the Water Horses, Muscular is surprised that the young boy is the child of the heroes that he murdered. Kota states how the result of his prosthetic eye is because of how his kind gets involved in such actions, in which his words hardly affect the villainous being at all, stating that he kills because he feels like it. He claims that he holds no grudge of his parents, that his parents were doing their best, ultimately leading to their downfall.

Midoriya then strikes back to attack Muscular, but instead of directly attacking him, he lands a hit into his muscle fiber, impeding his speed. Midoriya then proceeds to hit him with a 100% One For All punch. Muscular was sent into the wall, but was able to tank the punch, as he created a shield with his muscle fiber. Muscular was somewhat impressed by his punch then marched towards him. Midoriya demands why the League of Villains are attacking, but Muscular had no clue, as he was only here for his own enjoyment. From this point on, it is revealed that Muscular's been holding back this entire time, as he puts on a eye-like device, going all out. His entire body begins to cover up in muscle fiber as he attacks the pair boys. The two were able to evade him, but Muscular immediately strikes back again and again.

Casting Kota aside, Midoriya clashes against Muscular with a 100% Detroit Smash. While Muscular did felt pain, he noted how that attack was weaker than before. Despite this, Midoriya continues to hold him back, but is eventually overwhelmed as Muscular begins pushing him into the ground. Suddenly, Muscular's attacked by a splash of water, which is revealed to be Kota's Quirk. Being distracted by Kota, Midoriya takes the advantage of pushing back Muscular. He is then finished off by a 1000000% Delaware Detroit Smash, smashing into the wall, completely knocked out.

Following the Vanguard Action Squad's escape, Muscular was one of the villains left to be captured by the police, along with Mustard and Moonfish. He was then sentenced to be imprisoned in Tartarus.

Muscular remained heavily sealed within Tartartus as time went by. However, following the events of the Paranormal Liberation War, Muscular was freed from his imprisonment when Tomura (under All For One's influence) led a raid on the prison with the Near-High End Nomus. Muscular proceeded to battle and kill many of the guards before eventually making his way outside as he observed All For One himself reuniting with Tomura.

Muscular took charge of breaking criminals out of prisons across Japan, gaining the nickname "Jailbreaker" in the process. Yo Shindo and Tatami Nakagame of Ketsubutsu High School were sent to evacuate the citizens, but they distrusted them due to the societal disillusionment towards heroes. As they walked away, they got a call from their classmates Shikkui Makabe and Itejiro Toteki, warning them that Jailbreaker was heading their way. Suddenly, Muscular bursts through a building, yelling that he wants to play. He expresses his dissatisfaction that there are only two heroes for him to attack, and revels that he is finally freed from prison.

Yo tries to fight Muscular alone but is quickly incapacitated, to Tatami's horror. Muscular taunts Yo that he is unable to break through his heavy layers of muscles and prepares to kill him, causing Tatami to yell in shock while the civilians take it into their own hands to save him despite their powerlessness. Suddenly, Izuku knocks Muscular back and saves Yo due to his Danger Sense alerting him of the supervillain, while Muscular is glad that he can torment Izuku again.

They have a fight in which Izuku makes use of multiple other Quirks from the previous one For All users, and they exchange words with Izuku trying to understand Muscular's way of thinking and reveals his real name much to the latter's annoyance as he just wants to fight, the fight ends with Izuku knocking out Muscular with a blow to his stomach. To the Ketsubutsu students' surprise, Muscular had been easily defeated and restrained by Blackwhip. Muscular was later handed over to officials at the nearest police station, placing him under arrest once more.

Overall, Muscular is one of the most powerful members of the League of Villains. So far, he's been Midoriya's toughest opponent yet. He was able to inflict critical injuries on him, and Midoriya was forced to go beyond his limit to take him down, resulting in permanent damage to his right arm. 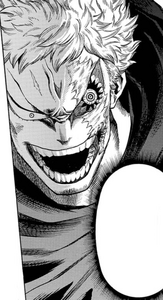 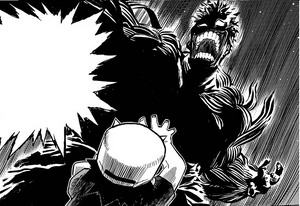 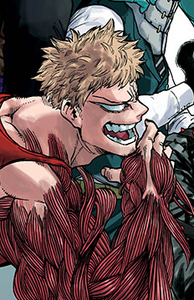 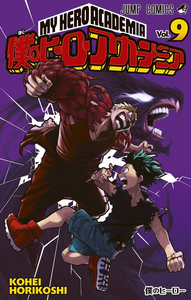 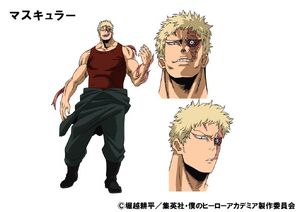 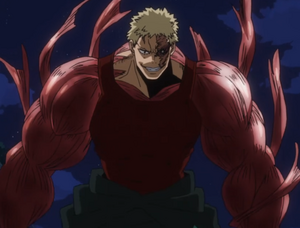 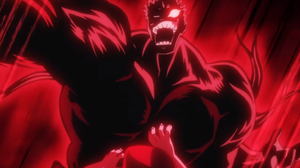 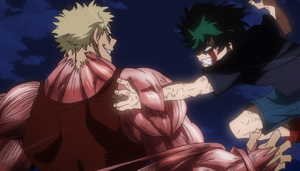 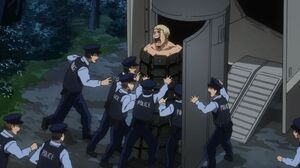 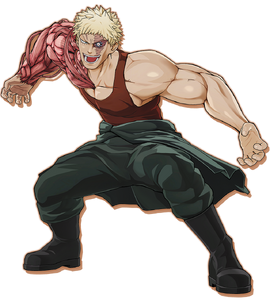 Muscular in My Hero One's Justice. 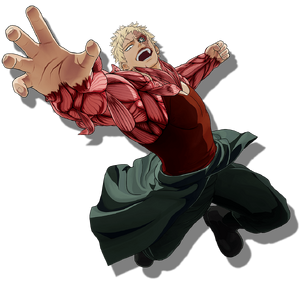 Muscular in My Hero One's Justice 2.