Security Guard at the Museum of the Modern Cookie

Guarding the paintings that the Museum of the Modern Cookie.

Being suspicious over innocent people.

To make sure all of the paintings at the Museum of the Modern Cookie are safe.

The Museum Guard is a minor character from The Cookie Thief special of Sesame Street. She works at the Museum of the Modern Cookie in the special, which is located in some unknown part of Sesame Street in a 3D animated world.

She seems to have more of a neutral status and not as much of a villain. Since it was a mistake when she accused Cookie Monster of stealing the paintings, but because of her rude and bossy personality, she has more of a villainous status.

She was portrayed by Rachel Dratch.

She is a security guard at the museum of the modern cookie and she is the leader of the Cookie Patrol. Which is composed of the penguin characters from the Sesame Street show.

The chase continues after a while with her and the cookie patrol guards being trapped in diversions until eventually they throw Cookie Monster, Elmo, and Chris out of the museum and she feels proud of what she did, until the trio shows up again with the help of Abby turning them into a painting and delivering them to the museum, and they follow the cookie thief into his lair behind the museum and Cookie Monster catches him and the cookie thief admits to his crimes.

She is then seen singing along with the cast during the final song of the special, and is shown to be more lighthearted from there on forward.

She is power hungry, ruthless, strict, mean-spirited, cruel, sadistic, somewhat humorous and funny, and extremely abusive. She shows no compassion for anyone and even goes far to even kicking out Chris and Elmo as well when she kicks Cookie Monster out of the museum. She strongly takes pride in her role as the lead security guard of the museum of the modern cookie, and even mocks and makes fun of people for being different for her own pleasure, and doesn't like to apologize either, since she had nearly refused to apologize to Cookie Monster for accusing him of stealing the paintings. She has a habit of constantly throwing people out of the museum and seems to always be angry and mad at everyone for no reason, even if they had never done anything at all.

She is shown to be somewhat nice in some scenarios, since she had apologized to Cookie Monster for her mistake, but it was only because Chris had forced her and reminded her to do so, and she had sang along at the end and was later nice after she realized her mistake.

She also has some comedic factors because she is played by Rachel Dratch and is a comedian in a lot of scenarios. Especially during some of the chase scenes in the special, and even uses humor in a lot of the special's dialogue.

She has a guard outfit that has a suit jacket with a badge, a police hat with a logo of a cookie outlining a picture of a paint and brushes inside of a triangle with curly short hair. Her full body is never seen, but it is assumed that she has a suit. 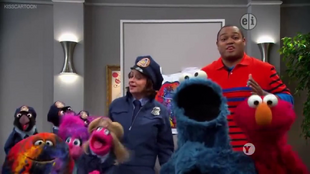