Transform the Zenkaiger's dimension into a world of mushrooms.

He is voiced by Mitsuaki Kanuka who also voiced the Great Mushroom World.

The Mushroom World made his first appearance as Ijirude places a gear that contains the Kinokotopia onto an ordinary Kudakk as it transformed into a Kudaiter and then into the first world monster of the series. Upon the creation of this here monster he then used this ability as every single mushroom began sprouting all over the places and even on both the human and Kikainoids head and if they don't defeat him anytime soon all of these humans and animals will die from the toxic spores except for the robots since their immune to it.

After the intro both Kaito and Juran notice all of the mushrooms on the civilian's head and wonder who has done to them, but unknown to them they were being watch by perpetrator who's standing on a building that is right behind Kaito. However it didn't take too long for the Zenkaigers to find them however, and Mushroom World entered a tussle until they overpowered him and he escaped in a cloud of spores.

A while later the Mushroom World as quickly discussing the success of his plan with Ijirude, and although confident in the Zenkiagers being unable to succeed, the group had a new member in the form of Gaon, who quickly made short work of him after gaining some help after that the Mushroom World was thusly destroyed and all of the mushrooms that he'd planted were gone.

The Mushroom World has a fairly aggressive attitude with shades of confidence, and often sprinkles mushroom puns into his speech. 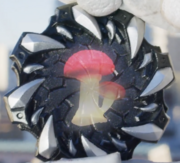