Manipulating people with his powers.

Get Black Canary to love him (failed).

The Music Meister is a supporting antagonist in Batman: The Brave and the Bold, specifically serving as the titular main antagonist of the Season 1 episode Mayhem of the Music Meister. He is a supervillain who has the power to control people through singing. He is also notable for being one of the only villains who was created exclusively for the series.

He was voiced by Neil Patrick Harris, who also played Dr. Blowhole in The Penguins of Madagascar, Dr. Horrible in Dr. Horrible's Sing-a-Long Blog, Chester Creb in American Horror Story, Ray Thompson in Justice League, Foy in A Million Ways To Die in the West, John Tagman in Law & Order: Criminal Intent, and Count Olaf in Netflix's adaptation of Lemony Snicket's A Series of Unfortunate Events.

Music Meister mentions that he discovered his powers as a child and used it on those who bullied him for singing in choir, using his hypnotic voice to force them to dance. As he sang during his first song "Bullies used to pick on me because I sang in choir, but something very strange occurred when I kept singing higher, the ruffians around me quickly fell into a trance, and it was then with wicked glee I made those puppets dance!".

Music Meister makes his presence known to the world when he used his hypnotic voice to control fellow villains Black Manta, Clock King, and Gorilla Grodd, as well as Aquaman, Green Arrow, and Black Canary. Using his six mind puppets, Music Meister hijacked a government satellite he plans to use to project his voice across the world. His actions caught the attention of Batman, and his eyes caught hold of Black Canary. When he failed to win her over, Music Meister decided to do away with her and Batman by tying them up in a death trap. But in his arrogance, Music Meister underestimated his opponents. The two heroes managed to escape the trap and faced off against Music Meister and a mind-controlled world. Even Black Canary appeared to be caught in his spell and began singing. Batman challenged the hypnotized Canary to sing higher than he. Batman used the ruse to grab Music Meister's microphone staff and hold it to Canary's mouth, amplifying her sonic scream enough to shatter the Meister's amplifiers, ending his control over the world and allowing Batman to take him out with one punch.

Music Meister is a playable character in Lego Batman 3.

Music Meister is a playable character in Lego DC Supervillains.

Music Meister's singing voice contains a hypnotic frequency that allows him to control minds. It also has the unusual ability of forcing his victims to express themselves only through song and dance, as if they are in a musical.

His weapon of choice is a cane/baton outfitted with a microphone that allows him to amplify his voice, and shoots sonic blasts that resemble sheet music. His mode of transportation is a motorcycle shaped like a beamed note. This can also convert to a scooter shaped like an eighth note, and to a helicopter.

The Music Meister changes outfits and hairstyles frequently over the course of the episode, having an extensive collection of ensembles based on different styles of music. One thing that remains the same is his sheet-music styled glasses. His outfits include - 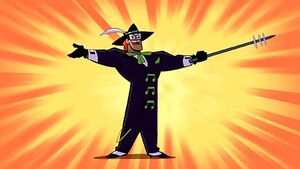 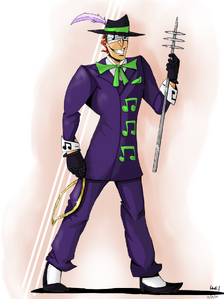 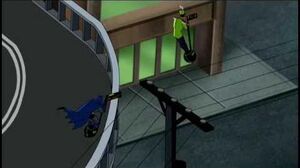 Batman the Brave & the Bold "Drives Us Bats" Music Video 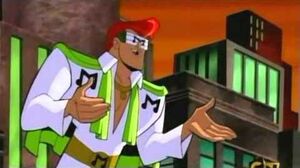 If Only-batman the brave and the bold music video 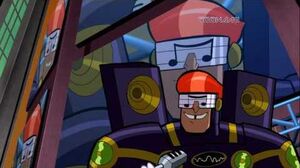 Retrieved from "https://villains.fandom.com/wiki/Music_Meister?oldid=4310108"
Community content is available under CC-BY-SA unless otherwise noted.