A Hat in Time

Ruler of the World (briefly)

Beating up the Mafia.

Obtain all of the Time Pieces (succeeded).

Mustache Girl is the main antagonist of the 2017 videogame A Hat In Time. Her goal is to kill off everyone that she considers a "bad guy" (a generic term for a villain). She makes her first appearance as one of Hat Kid's apparent allies, but she ultimately turns out to be the main antagonist of the game when Hat Kid reveals she wants to go home rather than fight off evil.

She was voiced by Eileen Montgomery, who also played Queen Vanessa.

Mustache Girl is a little girl with golden orange eyes. Her blonde hair is tied up in braids with turquoise beads. She wears a pink dress, a red hood, a red cape, turquoise shoes, and a lavender sash tied around her waist. She also sports a blonde curly mustache (which gives her the name) and a British accent. She is the only enemy who does not turn blue at all in the game, but can still be damaged.

Mustache Girl is a very rebellious, stubborn, unruly and obstinate individual. Her moral code borders on extremist acts, such as giving anyone she deems tainted the comeuppance she thinks that they deserve (via humiliation or even murder). She has a trait of being fanatical and overzealous with her goals, finding any way she can to achieve her goals. This is shown where she suffers a villainous breakdown because Hat Kid is not "going to use [the Time Pieces] to fight evil". In the game finale (after claiming one of the Time Pieces), Mustache Girl becomes tyrannical and oppressive by transforming the planet into a lava-ridden landscape and acting as a judge to banish the "wicked one" into the lava, while the "innocent" are set free.

She believes that forgiving others is obsolete, and that vindictiveness and punishment are better. She is also shown to be a daredevil, proposing to time travel despite the danger.

Mustache Girl makes her first appearance fighting off some Mafia goons before running off when encountering Hat Kid. She takes in interest in the newcomer and asks Hat Kid if she wants to join her cause in rebelling against the Mafia of Cooks. Mustache Girl then tells Hat Kid if she had something to do with the Time Pieces falling from the sky. When Hat Kid makes it up to her tower, she directs the alien to where her parasol has fallen.

Mustache Girl was captured by the Mafia Goons. After Hat Kid rescues her, they decide to work together to bring the Mafia down.

After being rescued again, Mustache Girl and Hat Kid decide to infiltrate the Mafia's headquarters. In his battle, the Mafia Boss reveals that Mustache Girl was caught and declared that the two of them will die as soon as the fight's over. After Hat Kid's victory over the boss, Mustache Girl wants to use the Time Pieces to take down The Mafia, but Hat Kid refuses (one reason may be that she knew that time travel can be dangerous) and the two become enemies.

Mustache Girl infiltrates Hat Kid's spaceship and finds where the Time Pieces are located, so she then uses their power to turn the planet into a lava-ridden landscape. Hat Kid eventually finds this out after she returns to the Space Ship.

Mustache Girl declares herself the leader of the world and promises to purge the bad guys. She was confronted by Hat Kid and lets her off (due to not committing any heinous and wicked actions). Hat Kid approaches her to reconcile and is smacked away, prompting Mustache Girl to become even more hostile and the two fought. After the battle, Mustache Girl is defeated by Hat Kid with the assistance from everyone and Hat Kid uses the Time Piece to restore the damage caused by Mustache Girl's actions.

Mustache Girl is transported back to Mafia Town and lies defeated, it is unknown what became of her afterwards. However, the player can choose whether or not for Hat Kid to give Mustache Girl a Time Piece.

Mustache Girl uses her throne room as the battle arena for Phase 1. She attacks by teleporting close to Hat Kid, who must counterattack by smacking her away. If she is not countered, Mustache Girl will strike, dealing damage. Mustache Girl can, in fact, be hit at any time, even though she does not turn blue. After five hits, Hat Kid and the enemies-turned-heroes band together and Phase 2 begins.

This Phase and future phases occur within a time rift Mustache Girl creates in her rage when she finds out that Hat Kid has started working with their former enemies.

At the very start of Phase 3, Mustache Girl will lose her temper. She will then fire a laser beam (which does not deal damage to Hat Kid even if she gets caught), causing every former "bad guy" to die. The redeemed "bad guys" then use the Pons gained from their death to power Hat Kid so she can deal the final 8 blows to the traitor. As the "bad guys" throw Pons, Mustache Girl will realize that her powers are weakening, so she decides to turn up the heat by spamming her hourglass attack. However, Hat Kid will receive power from the Pons and can use their energy to heal herself if she gets hurt.

Mustache Girl is eventually defeated and knocked flat on her face, skidding across the floor as the Hyper Zone disappears and the throne room rematerializes. Hat Kid promptly grabs the Time Pieces she lost to the traitorous mustache-bearing maniac and restores the original timeline of the universe.

In the "Seal The Deal" DLC pack, the player can unlock and fight a stronger battle against Mustache Girl. Dubbed "Mustache Girl EX" she is much harder, especially due to her final phase, where no Pons appear. She retains her attacks from before, and her breakdown cutscenes are much shorter. 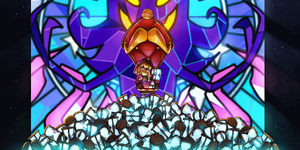