Mustakrakish is the main antagonist in the Metalocalypse episode "Dethtroll".

He was voiced by the Metallica lead singer/vocalist/rhythm guitarist James Hetfield, who also voiced Eye-Gouged Fan/Goat, a sniper, and Snorkey the Sailor in the same series.

Mustakrakish is a red Finnish lake troll who is woken up when Dethklok performs a song named "Awaken". He proceeds to go on a rampage that reaches throughout a whole nation, killing thousands of people, destroying entire cities, and disabling all electronics in Finland.

The band tries to make him go back to sleep with a quiet and gentle song. However, this nearly works until when a Dethphone starts to ring, making him wake up again. When William Murderface has a dropped call, he gets so angry and throws the Dethphone at the monstrous troll who tries to swallow it accidentally. However, he gets the Dethphone lodged in his throat, having it making minor cuts inside his throat.

Mustakrakish is a sadistic and destructive troll who takes delight in causing destruction of cities and killing thousands of people. He is also shown to have a cruel and dangerous personality. 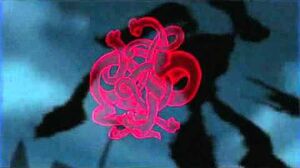 Retrieved from "https://villains.fandom.com/wiki/Mustakrakish?oldid=3890961"
Community content is available under CC-BY-SA unless otherwise noted.