Gas (can release a sleep-inducing gas from his body)

While not much is known about Mustard in terms of background, as to how or why he became a villain. He does seem to hold some sort of jealousy towards U.A. students, and how they're treated and pampered by society due to the school's popularity. He also seems to be very merciless and cruel, as shown when he shot at Tetsutetsu with his gun and showed no hesitation at all while doing so.

His ruthlessness aside, Mustard does the prove to have some tactical intellect and a degree of pragmatism. He believes that equipment’s function is more important over it looking stylish or cute, and chastised Himiko Toga for believing otherwise. He also states that no matter how powerful a person’s Quirk is, it doesn’t change the fact that they’re still human.

Because of his jealousy towards U.A., he has shown signs of arrogance when constantly mocking Tetsutesu's simple mind and bragging about his own skill with his Quirk, which ultimately led to his own downfall.

Outside of his Quirk, Mustard is not much of a combatant. He carried a 38 Revolver with him and seemed to have relied on it heavily. Despite this, he also proved to be cunningly smart and strategic, as he's shown to put good use of his Quirk and his surrounding environment to his advantage. 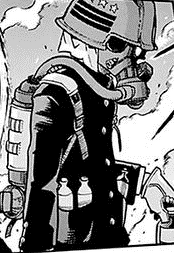 Mustard's appearance in the manga. 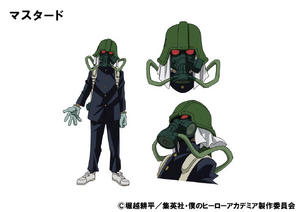 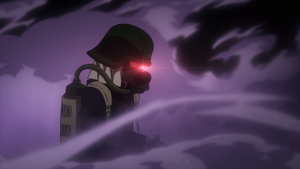 Mustard's debut in the anime. 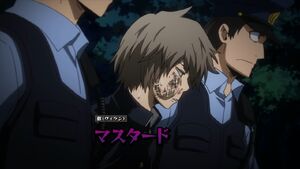 Mustard arrested.
Add a photo to this gallery

Retrieved from "https://villains.fandom.com/wiki/Mustard_(My_Hero_Academia)?oldid=4143841"
Community content is available under CC-BY-SA unless otherwise noted.