Musyamon is a minor villain in some of the Digimon series, mainly Digimon Adventures 02, and Digimon Tamers, but one of the major villains in Digimon Fusion.

Musyamon is a Champion Level Digimon that resembles a humonoid samurai, wearing worn out, torn up, samurai outfit.

When BlackWarGreymon appeared in Kyoto where Yolei was, one of the followers was a Musyamon that fought Shurimon until he was sent back to the Digital World.

Musyamon was among the shadowed Digimon that wanted Rika to tame one of them. Another plotted revenge on the Real World when Mitsuo Yamaki ruined his first attempt to appear in the Real World with Yuggoth and he managed to destroy the program the 2nd time. When he finally appeared, he terrorized the streets and fought Takato and Guilmon before being destroyed and loaded by Gargomon.

He is shown as one of the more cruel Wild Ones, since he tried to kill a little girl at one point. This made Henry realize that some battles were worth fighting (before Musyamon, he almost never wanted Terriermon to fight).

Musyamon was a minion of Blastmon. He lives in a shogun hideout where he kidnapped the princess Babamon and took her hostage where he spends his time watching ninja shows. The three red Monitamon Digi-Xrosed to HiVisionMonitamon and weakened Musyamon allowing Shoutmon X5 to finish him and his henchmen off with his Meteor Buster attack. 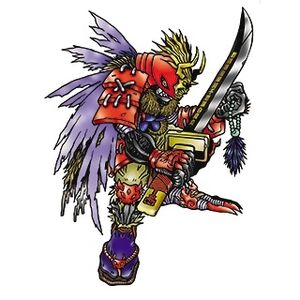