The leader of the Mutants

Peak physical condition
Nails and teeth that are filed to points

Kill the mayor of Gotham City.

Escape his cell (both succeeded).
Cause chaos throughout Gotham City. (partially succeeded).
Kill Batman, kill Commissioner Gordon and prove he will take over Gotham City (all failed).

Murder (including of an elected official)

He was voiced by Gary Anthony Williams.

The Mutant Leader's real name is never revealed. He was a hulking man with a shaved head whose teeth were filed down to sharp points. As his name implies, he led the Mutants, a violent street gang in future Gotham City. He mostly stayed on the sidelines while his minions went out and committed various crimes, ruling from the Mutants' hideout in a junkyard. He fancied himself more than a mere gang leader, apparently seeing himself as a dictator or a warlord. He regularly made televised threats to the people of Gotham, warning them to follow his commands or suffer the consequences. He also expressed some cannibalistic tendencies - he stated he wished to eat Commissioner Gordon's bones and Batman's heart. The Mutant Leader also killed the mayor with his teeth.

When Batman made his big comeback, he forced a Mutant to tell him where the gang regularly met, and then took the armored Batmobile to the junkyard. Using explosives and rubber bullets, he subdued the regular gang members until only the Leader was left. Arrogantly, the Leader marched up to the Batmobile and taunted Batman to come out and fight him. Batman accepted his challenge. In the ensuing fight, the younger, bigger, faster, stronger Leader easily dominated the aged Dark Knight, viciously beating him with a crowbar and nearly killing him. Only a timely intervention by the new Robin distracted the Leader long enough for Batman to defeat him.

The Leader was taken into custody and locked away in solitary confinement. His gang remained free, though, and continued terrorizing the city. The mayor tried to speak to the Leader to make him call his followers off, but he responded by killing him in the interrogation room. Batman realized the only way to get the Mutants to back off was to make them stop worshiping the Leader, to dethrone him in their eyes, so he engineered the villain's escape from prison, and also arranged for his entire gang to be present. The two opponents fought each other in a mud pit.

The mud slowed the Mutant Leader down, making him slower than before. Batman was also able to render one of his arms useless by punching a nerve that made it go limp. Despite this, the Leader still presented a considerable challenge to the Dark Knight. Nevertheless, Batman eventually triumphed. After getting the gang boss down for the count, he broke several of his limbs in front of the shocked and horrified Mutants. The crippled Leader was returned to jail, and the Mutants then splintered into several factions. Some stayed Mutants, others formed new gangs, but most of them became part of the vigilante group "Sons of Batman."

In the episode Legends of the Dark Knight, three children named Nick, Matt, and Carrie (based on Carrie Kelly) had different views based on the comic history of Batman. Nick's view of the Dark Knight is a homage to the first Batman stories of Detective Comics, in which Batman seems to be somewhat portrayed as a strange, dark, creature of the night. Matt's tale is a homage to the Batman comics of the 1960's and 1970's.

Carrie's tale is a homage to The Dark Knight Returns. A slightly toned down version of Batman's battle with the Mutant Leader is seen, and the segment combines the two fights so that the mud pit is in the junkyard.

Here he was voiced by Kevin Michael Richardson, who is a great fan of The Dark Knight Returns.

The Mutant Leader appears as the main antagonist in this very faithful adaptation of Frank Miller's comic.

The Mutant Leader has a cameo in the LEGO Batman Movie, briefly appearing and attacking Batman inside his car. 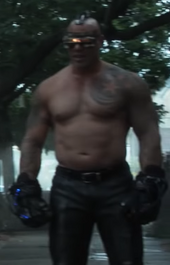 Mutant Leader made his live-action debut in the fifth season of the FOX television show Gotham. In this version, the Mutant Leader and his gang operate in Gotham City prior to Bruce Wayne becoming Batman. 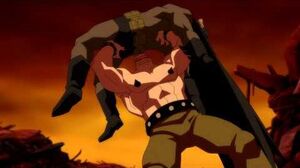 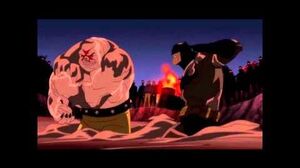 Retrieved from "https://villains.fandom.com/wiki/Mutant_Leader?oldid=4256101"
Community content is available under CC-BY-SA unless otherwise noted.