The Mutant Reptile Leader is an antagonist in Ben 10: Ultimate Alien. He was the first reptile to be turned by Dr. Animo. He has only made one appearance so far in "The Eggman Cometh". Like all others of his species, he could fly and had razor claws.

The Mutant Reptile Leader is quite "dopy" and did not have much of an intellect because he couldn't be let out in the daylight not until the time was right, and when Dr. Animo said about giving him a name and saying "Impossible", the Mutant Reptile Leader thought he was referring to him but rather he was referring to Ben Tennyson and his team breaking in.

The Mutant Reptile Leader has sharp claws. He can also fly to escape from enemies. Like his species, he needs heat to survive.

They can easily be defeated by freezing them. 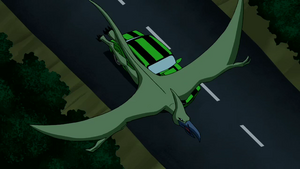 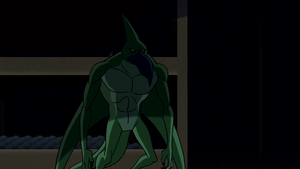