Created to hunt down and contain mutant "threats".

Xenophobic Military
The Mutant Response Division were a group of elite soldiers designed to protect the world from the perceived threat of mutants, as such, they were enemies of the X-Men and part of the much larger mutantphobia pandemic that has always plagued the Marvel Universe.

The MRD are also ultimately the unknown pawns of Bastion, who orchestrated the events necessary to prompt the creation of the team - all as part of his master plan to exterminate mutants from existence.

The Mutant Response Division or M.R.D. appear in Wolverine and the X-Men as a mutant hunting organization led by Colonel Moss with the job of finding and containing dangerous mutants. M.R.D. was sponsored by Senator Robert Kelly and Billionaire industrialist Warren Worthington II. Dr. Bolivar Trask and Dr. Sybil Zane served as the scientists for the organization when it came to developing the Sentinels. The M.R.D has as nickname "the Mardies". Moss MRD commands to find and capture mutants, humans had some hidden Logan after he had saved a child, but the MRD discovers all and they arrest the family who saved Logan and the father is tortured by Colonel Morse. But Logan comes to save them Moss warns him to leave alone that family. 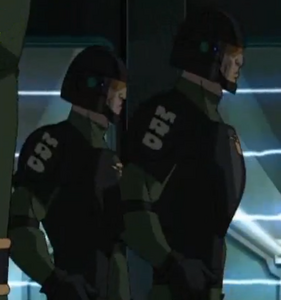 Retrieved from "https://villains.fandom.com/wiki/Mutant_Response_Division?oldid=3705061"
Community content is available under CC-BY-SA unless otherwise noted.