Aid the Precursors in destroying the Earth and our universe (failed)

Mutavore is a male Category I.V. Kaiju and a minor antagonist in the 2013 film Pacific Rim.

Mutavore was sent from the Anteverse to our universe by the Precursors. After Mutavore comes through the Interdimensional breach, he heads straight for the city of Sydney, Australia. The creature proceeds to destroy two Jaeger's guarding the city before easily breaking through the military's giant anti-Kaiju wall, before beginning his assault on the city. Mutavore manages to destroy most of the city's buildings before being intercepted by Australian made Jaeger, Striker Eureka. The two giants then engage each other in combat, and despite the battle being close, Mutavore is finally defeated when Striker fires its chest missiles, which strike Mutavore in the torso and head, killing him almost instantly.

Mutavore's attack on Sydney ultimately proved that the Military's Anti-Kaiju wall would not be the answer, causing them to re-activate the Jaeger program. 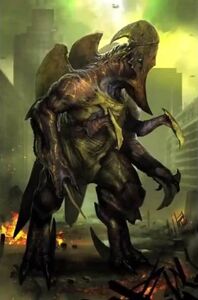 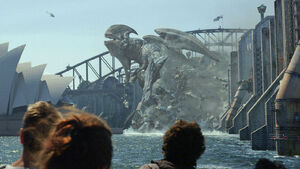