Villains Wiki
Register
Don't have an account?
Sign In
Advertisement
in: Doctors and Scientists, Male, Corrupt Officials,
and 62 more
English

Experimenting on other beings.
Abusing Vican.

Assist Makuta Teridax in his quest of overthrowing the Great Spirit and conquer the Matoran Universe. (failed)

Mutran was the major antagonist in the BIONICLE series and also serves as the supporting antagonist in the Karda Nui arc. He was a Makuta, who served as one of the scientists of the Brotherhood of Makuta as he was in charge of creating Rahi, which were used to populate the Matoran Universe.

He was also once a good friend of Chirox, though they eventually became bitter rivals when they started to despise each others' works. He was also responsible for creating the Shadow Leeches as well as transforming Takanuva into the Toa of Twilight.

After the few days following the completion of the fortress in Destral, Mutran and his friend Chirox were attempting to salvage some parts from one of Spiriah's Rahi experiments when they were approached by Makuta Teridax, who asked them to meet Miserix, the leader of the Brotherhood. When they finally approached into the throne room, Miserix ordered them to go to Xia and make the Vortixx to stop charging excessively high prices for their goods. Eventually, Mutran ended up going with Icarax and his aide, Pridak to Xia, where they successfully convinced the Vortixx to do so. In the island, Mutran accidentally left behind an experiment which was the sentient rock as the rock later became the Mountain. Eventually, both Mutran and Icarax were forced to dragged Pridak out of Xia after the latter saw the island's potential.

After the meeting between Teridax, Icarax and the two members of the League of Six Kingdoms, Kalmah and Ehlek had ended, Mutran was ordered to supply Rahi for the League's armies but never sent Kalmah anything that he expected to last more than three days. One such species of Rahi that he created were the Blade Burrowers.

Following the aftermath of the League of Six Kingdoms' defeat, Mutran, Gorast and several Rahkshi were sent to Kalmah's fortress to clean up the remains. While Gorast and the Rahkshi hunted down the few survivors of the League's army, Mutran noticed that the Blade Burrowers had not only survived, but were building a map. After that day, Mutran attempt to discern the significance of the map, but never succeeded, confessing to be frightened by its implications.

Following the few weeks after the Matoran Civil War, Mutran was ordered by Miserix to keep charge in the center of the Southern Continent, which he however, did not pay much attention to. Later, he was then assigned by Miserix to meet the being called Tren Krom on his island. When Mutran and several Rahkshi got onto Tren Krom's island, they were attacked by Tren Krom, who destroyed the Rahkshi and pulled Mutran into the cave and the being search through Mutran's mind. After the few hours of the encounter, Mutran woke up in the outside  and he realized that he had the knowledge that Teridax needed to overthrow the Great Spirit. Then, Mutran returned to Destral and told Teridax about this.

When Teridax called a meeting between the members of the Brotherhood, Mutran and the other Makuta witnessed Teridax and Miserix engaged each other in the fight.

Mutran was a brilliant and skilful scientist of the Brotherhood of Makuta, though he was also very insane, short-tempered and eccentric at the same time. He was also very sadistic as he used other beings for his twisted experiments.

Although he and Chirox are good friends in the past, they both eventually hated and mocked each others' works as both of them thought that their Rahi are better than those of the other.

He also have a dark sense of humour as he mocked his enemies in the rather less comical manner. 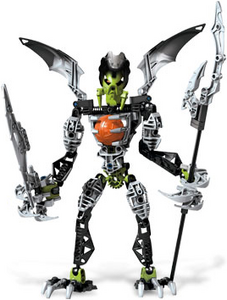 Mutran in the set form. 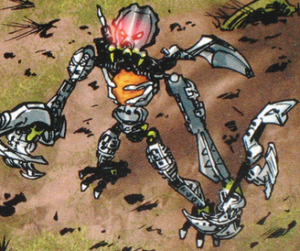 Mutran as he appears in the comics. 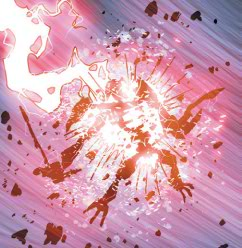 Mutran's death in the comics.