Daddy (by his daughter)

Progenitor of the entire Demons

Leader of the Twelve Demon Moons

Kill Tanjiro and Nezuko Kamado.
Become an absolutely perfect being.

In the Japanese version of the anime, he is voiced by Toshihiko Seki, who also voiced Aaroniero Arruruerie (while disguised as Kaien Shiba), Rau Le Creuset and Lord Embryo. In the English dub, he is voiced by Greg Chun.

As a human he was diagnosed with a very rare illness and should have died at the age of 20. His doctor then traveled the land and found the mystical Blue Spider Lily. Using it as medicine cured Muzan but also turned him into a demon. Out of rage he killed the doctor as he realized that he was unable to walk in the sun anymore. He searched the entire country for the Spider Lily to reverse the effect, but he couldn't find it anywhere. Muzan then adapted to his new life and had no qualms slaughtering humans.

But he considered himself imperfect and wanted to somehow get rid of his weakness to the sun. That's why he decided to spread his demon blood as much as he could. He hoped that one day a demon would be able to overcome the sun and he could then devour that demon, getting rid of his single flaw. By giving a select few even more of his blood, he created a group of very powerful demons, called the Twelve Demon Moons, who follow all his orders. Once he was almost killed by an ancestor of the Kamado family. Since they possess the "Breath of Fire" skill, he was at a disadvantage and suffered a crushing defeat. Since then he holds a grudge against the family and wanted revenge.

So one time, he traveled to the mountains where the current Kamado's lived and slaughtered the four children and the mother. However, some of his blood entered the eldest sister, Nezuko, and turned her into a demon. He then retreated to his family he set up and went undercover again.

Eventually, Tanjiro Kamado coincidentally picked up his scent and approchaed Muzan. Muzan wasn't expecting to see him at all and was shocked at first. But since he is walking with his daughter he puts up a kind facade and pretends to wonder who Tanjiro is. Tanjiro is mad at him and wants to kill him. In order to get away and distract Tanjiro, Muzan slices a random passerby's neck and turns him into a demon. While that demon attacks his wife, Muzan gets away with his family. Before entering the carriage, he tells his wife he has to do something and they should go ahead.

He then walks through an alleyway where a drunk guy bumps into him. The drunk starts mocking him and states, he doesn't like fancy-pants like him. When he adds, that he's so pale, he looks like he had died already, Muzan smashes him into the wall, killing him instantly. The muscular brother then angrily attacks him, only to be kicked into the air and be killed. The drunk's girlfriend holds his corpse, crying. He then rhetorically asks her if he looks pale or weak, then replied to himself, stating he is infinitely close to perfection. He then stuck his finger into her forehead. Due to her body receiving so much blood from him, that it couldn't handle the demon transformation, she melted away and died in a gruesome manner. Muzan then calls his subordinates, Yasaba and Susumura, and orders them to kill Tanjiro.

Muzan continued to send his Moons to kill off the Demon Slayers. However one day, he felt that Nezuko was able to walk in the sun. He was so thrilled to consume her and finally reach perfection, that he immediately killed the family he was hiding at. He arrived at the Demon Slayer Estate and confronted their leader Kagaya. He predicted this however and sacrificed himself by placing bombs. Kagaya died and Muzan, heavily injured, was attacked by all of the Demon Slayers. All of them were transported to the Infinity Fortress, a place controlled by one of his Moons. All of them were split up and Muzan took time to heal.

While the Demon Slayers fought and died and Muzan healed inside of a fleshy cocoon, all of his Moons were killed, except the one controlling the Fortress. He burst out of the cocoon, fully healed and stronger than ever. Dozens of Slayers surrounded him, but he simply killed each of them and only grew stronger with each one he ate. Eventually he confronted Tanjiro, who told him that he should no longer exist. Muzan was tired of them wanting to avenge their loved ones. In his eyes they should see themselves as lucky and move on with their lives. Muzan told them that they should see his actions as a natural disaster, comparing his slaughtering to earthquakes or storms.

He appears as a young man with pale skin and red glowing eyes and he has black curly hair. Muzan wears a white fedora along with a black suit and a white tie. When attacking, he reveals his fangs and his nails grow sharper and turn blue.

Muzan has the ability to change his appearance which made is so easy for him to hide from the Demon Slayers since decades. During his meeting with the Lower Moons, he was disguised as an elegant woman wearing a long black yukata, causing the Lower Moons to not recognize him immediately. Later he transformed himself into his latest cover identity, as the adopted sickly son to an old couple, taking the form of a young child with pale white skin and black neatly silky smooth combed back hair. His main outfit in this disguise being a plain white button up shirt and black cargo shorts with long tube socks and loafers.

As the leader of demons under the pretense of a civilized and innocent man, Muzan is deep down a callous, ruthless and extremely narcisstic perfectionist with a horrendous scale of self-absorb streak. He never tolerates anyone who mocks him, even to the point of killing a pair of drunk bystanders who were simply rude to him, alongside their female partners, while proclaiming his own delusional grandeur.

He sees himself as perfect, since he is immortal and very powerful. The only thing, he's weak to, is the sun. That is why he turned other humans into demons and spread his blood, so that one of them might find a solution against the sunlight, so he can become truly perfect. He mostly wants to keep himself out of danger by using his allies and wants to enjoy his life without any harm coming to himself.

Muzan also sees his subordinates as nothing but useful tools towards them, and all of his subordinates were formerly human who followed him because of their hopeless life or sadistic streak. Muzan lures in people at their lowest to become demons, often corrupting them wholly. Gyuutarou, Daki and Akaza are prime examples of this.

To prevent himself from being exposed, he curses his subordinates in a terrifying manner so that none of them may utter his name, or else they will be killed instantly in a morbid fit of cruelty. This showed him to be a hidden paranoid coward and fueled Tanjiro's disgust towards him, causing Tanjiro to believe Muzan is the only true demon in the world. Interestingly, this almost paranoic sense of self-preservation, contrasts with his megalomania.

Muzan is very cunning and intelligent. He is perceptive enough to be able to seemlessly blend into human society and he even started a family. He can hide his evil side and put on a friendly facade if necessary. He is manipulative and can quickly get people on his side for him to use them. His cruel and imposing nature has gained him great admiration of many demons. 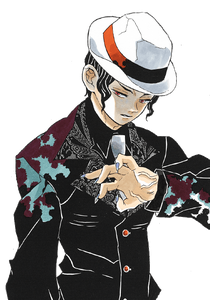 Muzan in the manga 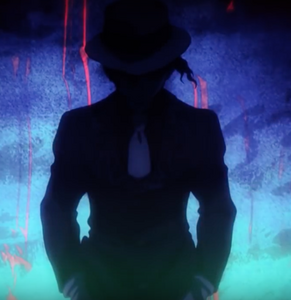 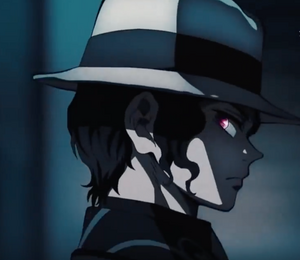 Muzan in the anime's opening. 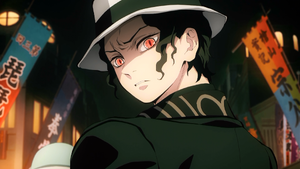 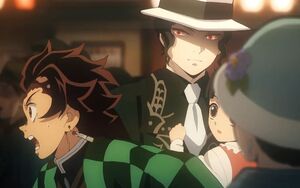 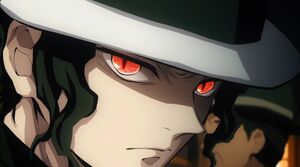 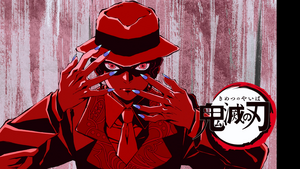 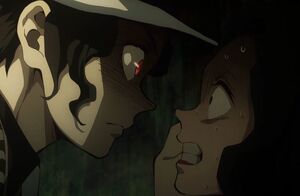 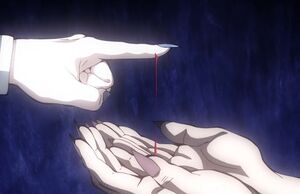 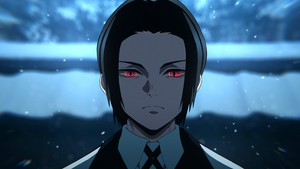 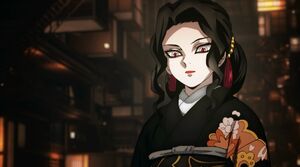 Disguised as a female. 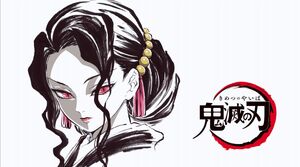 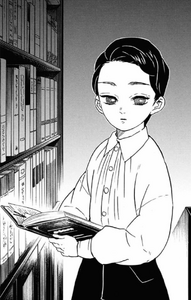 Disguised as a kid. 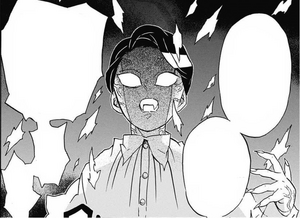 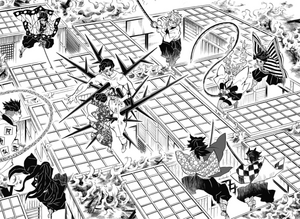 Muzan surrounded by the Pillars. 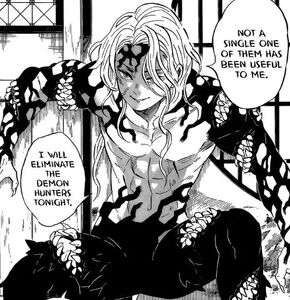 Muzan in his battle form.
Add a photo to this gallery 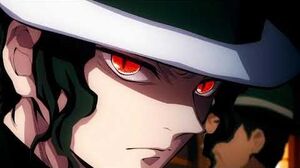