Experimenting on the villagers and her servants.

Mylène Beardsley is the main antagonist of the 1998 light novel BIO HAZARD: The Wicked North Sea. She is the daughter of Dr. Beardsley, 16th Earl Beardsley, the head of the prestigious Beardsley family and lived in the Beardsley Castle with her butler, Gilliam. It is later revealed to be a byproduct genetic experimentation that was undergo by her father and has been developing an enhanced version of the T-Virus, known as the Neo-T Virus. She's is also the creator Millenia, an B.O.W. created from her genes.

She is a young beautiful woman who is 17, long silver hair that reaches to her waist, long sideburns and golden eyes. She wears a long dress glittering with sewn-in small and large gems, earrings, a tiara and necklace with seven different colours of large jewels in a row.

Beneath her beauty and kindness, Mylène is a heartless narcissist who developed an immense superiority complex, wanting to earn a higher position in the Umbrella Corporation and even takes great pride in her family name and looks down on people who don't have the same genes as her, "superior in everything from brain to appearance", or use them as tools. She shown to be a sadistic and misanthropic when she tried to feed Rain soup with human eyeballs, released zombies onto her guests and tried to kill Norse. With her tendencies, Gilliam was disguisted with her sociopathic behaviour, even Umbrella itself questions her methods.

Her father, Dr. Beardsley, subjected Mylène to experimentation allowing her to gain full access to her brain. She managed to further expand her given capabilities through modern cyber techniques and built a DNA genotype mutual rewriting program and fulfilled a link between her brain and a computer, gaining virtually infinite knowledge and networks, as well accessing military data, even access to a nation's nuclear weapons. After her father passed away, she developed an superiority complex and wanted to gain full control over Umbrella and entire world. She would later pursued development of the Neo-T Virus.

She created many creatures via the Neo-T Virus, including her alter-ego, Millenia, who was modeled after genes. However, her plans would eventually fall apart when the British Army counterterrorism CRW member Norse Chirac as well as Rain Rubens, came to find their friend, Kate, at the Beardsley Castle and uncovered evidence about her experiments.

Mylène arrives at the party while being introduced to the guests by Gilliam, she walks towards the front of the dinner table and greets the guests. While chatting with the guests who thanked her for helping their companies, she noticed how Norse stared at her, wanting to say he was a completely worthless existence. A eldery woman who sit next to Norse, asked him about how he knows Mylène, who spoke up and told her that he was a super-elite soldier in the British Army's specialized anti-terrorism unit, known as the CRW-wing team. This surprised the guests and explained about Norse and his team’s rescue mission that failed and left the military.

When Rain regained her consciousness, she was found on a bed in a small and empty room, where Mylène, Gilliam and the young members of the filming crew stood in front of the door. Rain attempts to flee but is caught by one of the film crew members and thrown back in bed. Mylène welcomed her with a dish. Rain grabbed the lid and saw an ordinary soup meal. But she sees a couple of two whitish spheres that look like eggs floating in the soup. She realizes that the eggs were pairs of human eyeballs. Rain is then kidnapped by Mylène, who raps her in front of a set of monitors in the corner of a sealed room, where she also watches Norse fighting for his life through a television monitor.

After Norse kills all of the assailants, Mylène was disappointed that Gilliam’s subordinates were no use at all and impressed with Norse’s “performance”. Once Norse got back to the castle, Mylène released her experiments out of the containment and nerve gas on her own guests. Unbeknownst to her, Gilliam secretly Gilliam contacts the Umbrella’s chief executives about the development of an enhanced T-Virus and Mylène’s selfish behavior, with the research facility being destroyed by the Zombies. He uses his authority as a member of Administrative Division Special Affairs Section Two to remove Mylène’s rights within the company and for her to assume the responsibility for the entire incident.

Norse arrives at Mylène’s laboratory and sees her and a tied Rain on a large monitor screen. She questions him and mockery asks if he wants to become one of her “lovely monsters”. She explained to him how she was created as an enhanced human and aims to be at the top of the Umbrella Corporation. She also tells him that Lord Oswell E. Spencer was not the founder of Umbrella, but her father was, as he aided Lord Spencer as her business partner at the time of the company’s establishment. Mylène let’s Rain go and releases multiple Flasks for Norse to fight. After killing all of them, a silver-haired woman that he encountered appeared and revealed by Mylène to be a B.O.W. version of her named Millenia created with her DNA. During the battle, Mylene released two more Flasks for Norse to fight.

After defeating and killing Millenia, Norse disembodied Mylène with Gilliam's gun, but her upper body catches the hull with her claws in an attempt to stop them from escaping. Norse eventually uses an anchor to slam her, and her lifeless upper body is carried away by a water vortex. 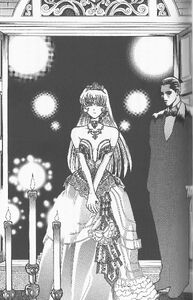 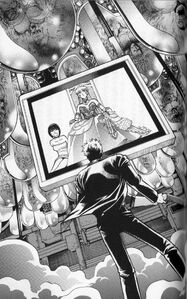