Villains Wiki
Register
Don't have an account?
Sign In
Advertisement
in: Movie Villains, Anti-Villain, Friend of a Hero,
and 13 more

Jingle All the Way

Get a Turbo-Man doll for his son (succeeded).

Myron Larabee is the main antagonist of the 1996 Christmas comedy film Jingle All the Way. He is portrayed as a mail man who was also on a mission to get a Turbo-Man doll for his son. Then later in the parade climax, he disguises himself as Turbo-Man's archenemy Dementor.

He was portrayed by Sinbad.

In the beginning, he was supporting Howard Langston at a toy store by explaining he was there to buy a Turbo-Man doll for his son. After a pep talk about having the same goal, the store was open, but much to their horror, all the Turbo-Man dolls were gone, but Myron does encourage Howard that there must still be some Turbo-Man dolls elsewhere. They even try to ask the employees if they have more left but only to be laugh at like jerks, until Howard reminded them there Christmas spirit, even Myron was proud of Howard to stand up to those employees, but soon he and Howard went on their own separate missions to find the doll.

Every time they thought they put aside their differences; they immediately turn to rivals whenever they believe there is a chance that they could get a Turbo-Man doll whenever there is one left. Together, they have several misadventures through places like a mall and a broadcast station in their pursuit of the same toy.

Myron eventually arrives at a parade when he learned that Howard had accidentally been dressed up as Turbo-Man and as such, would be able to get a Turbo-Man doll. As a result, Myron dresses up as Dementor after tying up the actor. He fights with Howard for the doll and after loosing his patience, he overpowers Howard with his rocket fist, but Howard fights back by using his Turbo Disks. Myron chases Howard's son Jamie (who had the Turbo-Man doll) all the way to the top of the roof and onto a display tree. Howard manages to defeat Myron when he threw his Turbo-Rang on his helmet which caused him to fall all the way to the police float. After complaining about his failure and how his son will soon turn out, Jamie felt sorry to see Myron as a loser in front of his son due to his own obsession, so he decided to let Myron keep the doll by claiming that his father is the true Turbo-Man.

While he is not truly evil, just impatient, paranoid and overexcited, Myron is willing to go to criminal lengths to get the toy for his son. He is willing to work with Howard if they can find a break on Turbo-Man given he tries to team up with him unless there is only one left. 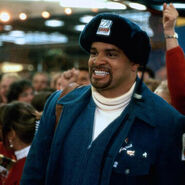