Msy-Tech Central (located beneath the Museum of Pagan Antiquities within London, England)

To acquire souls for Mephisto in exchange for wealth and immortality.

Mys-Tech is an occult megacorporation and one of many villainous factions in Marvel Comics. They were depicted as a shadowy Faustian organization who acted as the main villainous faction in a range of initially successful but short-lived comics launched in the US by Marvel UK in the 1990s including the Marvel UK comic Overkill. They first appeared in Warheads #1 (June 1992).

An British multinational chemical corporation with worldwide interests, Mys-Tech is one of the powerful companies on Earth. It is headquartered in London, United Kingdom/England. Mys-Tech employs thousands of people with facilities all over the world. Their assets included the "Un-Earth", a model of the planet that operated like a voodoo doll or sorts, and the Warheads, mercenaries who could travel through wormholes to other dimensions or times. The board members eventually transformed themselves into beings of even greater power known as the "Techno-Wizards".

In the year 987, A.D. seven people who are the ruling "Mys-Tech Board", were originally members of the "Sect of Chasidm", an arcane druid cult made a deal with the demon Mephisto: in exchange for influence, power, and immortality, they agreed to funnel souls into Mephisto's hellish Realm.

Over the subsequent millennium, those same 7 mages acquired great wealth became the board members of a London-based corporation named Mys-Tech which was founded in 1936 A.D. And to pay their debt to Mephisto, the Mys-Tech board plotted to take control of the world and kill vast numbers of innocent people.

Haldane was chief scientist, discovering the space/time "wormhole" portals through which Rathcoole supervised their agents, the Warheads, in acquiring advanced technology and forming Gena-Sys, their secret research lab run by Dr. Oonagh Mullarkey under Wychwood's supervision. The Warheads obtained such valuable material as Protosilicon, which allows computers to act via advanced logic and intuition, as well as mutating living beings; and the "MOPED" (Mind Operated Personal Dematerialization) technology which enables personal space/time/dimension transport. Further subsidiaries of Mys-Tech include the Psight Corporation, developed by Wychwood to empower young human mutates; the Nakasoni Corporation, which refined the Protosilicon that inadvertently empowered the bio-computer warrior Digitek; and the Omni Corporation, under Wychwood, a front for the Bane, servants to the Red Lord, the degenerated Celtic war god Bodb Derg. Crowe serves as de facto leader, Gryffn as security officer; Porlock's operations have included efforts to master the MOPED and the powerful entity Abadon, while Tyburn has pursued secret agendas.

Recently, the Mys-Tech Board sought ways to escape Mephisto's oppressive quotas, but Haldane's quest for alternative means of immortality was discovered by the demon-lord, who slew him and punished the others. Nonetheless, Mys-Tech's efforts continued, though many attempts have instead generated some of their greatest adversaries, including the Gena-Sys created Genetix team and the transgenic, trigger-happy prodigy Killpower, the MOPED empowered Motormouth, and Dark Angel, to whom Tyburn has shown mysterious favor. Mys-Tech's most ambitious effort was the creation of the Un-Earth, a miniature replica of Earth created via their techno-magic which served as a virtual "voodoo doll"; actions affecting or occurring on the Un-Earth affected the true Earth. At the peak of the Un-Earth's power, the Techno-Wizards attempted to take control of Earth, beginning with sending monstrous demons to attack mankind. Many heroes fell against Mys-Tech, but Wolverine and Death's Head (Minion) retaliated by killing two of the Board members, nearly unraveling all of reality in the process. Dark Angel led Professor X, Dr. Strange, Death's Head, the Knights of Pendragon's Albion, and Motormouth in repairing reality, turning back time to before the demons were unleashed and forever barring the Board from accessing the Un-Earth again.

Frustrated by their defeats by the superheroes, Crowe led them to use their bio-computer to restructure them on a quantum level, granting them much greater power. However, they still failed in their efforts to usurp a piece of the fabric of reality to gain much greater power, thwarted by Dark Angel, Death's Head, and others. Undaunted, they made efforts to achieve power and/or escape Mephisto's control on other planets, such as Eopia, foiled by the heroic Dark Guard, and even in an alternate future Mars Colony, defeated by Death's Head. Though not seen in some time, Mys-Tech has proven to have their hands in virtually every dark plot in the United Kingdom, and many more across the world and beyond. 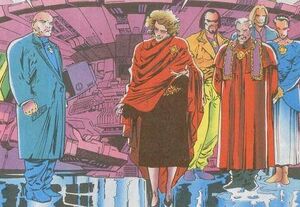 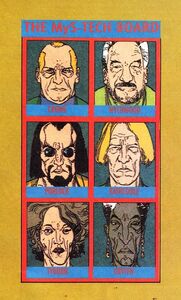 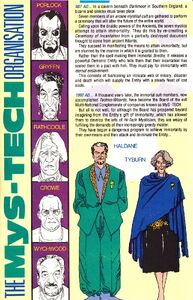 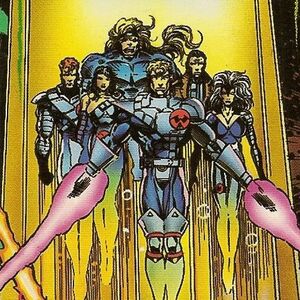 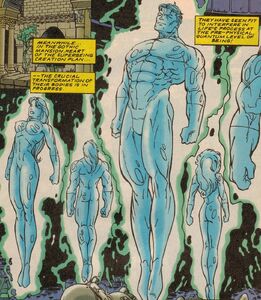 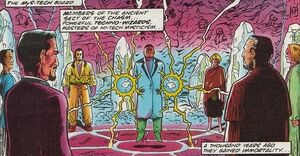 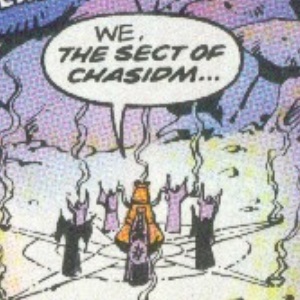 Retrieved from "https://villains.fandom.com/wiki/Mys-Tech?oldid=3529296"
Community content is available under CC-BY-SA unless otherwise noted.