Klum: Same abilities as former two, with mutant powers of telepathy and teleportation.

Destroy Spider-man in the most dramatic way possible

Mysterio is the supervillain identity taken by three different people, all of whom are/were enemies of Spider-Man in the Marvel Comics Universe.

The original Mysterio was Quentin Beck, an actor and special effects artist who was turned away from a good movie gig, and decided to prove himself by becoming a phony vigilante and take down Spider-Man. Donning the role of Mysterio, the Master of Illusion, Beck went to the Daily Bugle newspaper and announced that he would bring the hated Spider-Man to his knees. The newspaper editor, J. Jonah Jameson, who hated Spider-Man with a passion, agreed wholeheartedly, and supported Beck's stunt. Mysterio soon battled Spider-Man, ultimately defeating and humiliating him through use of his many tricks and special effects. He was dubbed a hero before Spider-Man fought him again and exposed his real intentions.

Since then, Beck became a member of one of Spidey's main Rogues Gallery, several times battling the web-head solo, and also joining up with Doctor Octopus's supervillain team, the Sinister Six. He once took the identity of a psychiatrist and nearly convinced Spider-Man that he had gone insane and to reveal his secret identity.

Later in his life, Beck learned that he was dying of cancer, and decided to perform one last act by driving the crime fighter Daredevil insane. He failed to do so, but did find out the superhero's secret identity, and hired the assassin Bullseye to murder Daredevil's girlfriend before Beck killed himself after battling Daredevil.

The role of Mysterio was next taken up by Daniel Berkhart, who was paid by J. Jonah Jameson to convince Spider-Man that he was the ghost of the original Mysterio. After he failed and was sent to prison, Jameson abandoned him, and he became resentful of Jameson because of it. Berkhart later escaped and went under the guise of the supervillain Jack O' Lantern, calling himself Mad Jack. He attacked Jameson and beat him to a pulp, blackmailing him into selling the Daily Bugle to Norman Osborn.

Berkhart switched between the roles of Mysterio and Mad Jack, tormenting Spider-Man, JJJ, and Daredevil. He soon stayed permanently with the role of Mysterio, getting help from Quentin Beck's cousin, who also was skilled in special effects.

Berkhart sold a spare Mysterio costume to the Kingpin, who in turn sold it to the next Mysterio, Francis Klum.

Francis Klum was a Jewish mutant with the abilities of telepathy and teleportation who partially grew up in a Nazi concentration camp and was abused by his older brother, Garrison, who was a drug dealer. Garrison forced Francis to use his telepathic powers to brainwash clients into buying his drugs, and used his teleportation powers to instantly inject them into their bloodstream. After awhile of this, their dealings attracted the attention of the anti-hero vigilante Black Cat. When Garrison attempted to rape her, Klum killed him by teleporting into the space he occupied.

Black Cat went to jail for the murder, but Klum teleported her out and onto a bridge (the same one on which Gwen Stacy died). When Spider-Man arrived, he attacked Klum viciously, as he thought he was trying to hurt Black Cat, as well as the fact that he had painful memories associated with that bridge. Klum pulled a gun on him by Spider plugged it with webbing and it exploded, sending him off the bridge. He teleported away, but he had acquired so much kinetic energy, that when he landed he shattered his leg.

Desperate for revenge, Klum decided to take on the role of one of Spider-Man's powerless villains in order to catch the webslinger off guard, and bought Daniel Berkhart's Mysterio costume from the Kingpin. Now as Mysterio, Klum attempted to enact his revenge, but during his attack, the other two Mysterios appeared. Beck had seemingly returned from the dead, and Berkhart was angry that Kingpin had sold the costume. The three Mysterios battled, along with Spider-Man, and Beck beat Klum, while Spidey defeated Berkhart. Klum was wounded in the battle and teleported away.

Quentin Beck has once again taken up the role of Mysterio and is a member of the current Sinister Six.

The Ultimate Marvel version of Mysterio was introduced in Ultimate Spider-Man Annual #3. His appearance is drastically changed from his 616 counterpart. He wears all black with a green neck brace that produces blue smoke that envelopes his face. In his first appearance, he had a police technician to set up surveillance equipment to the police department. However, after NYPD's police captain Frank Quaid asked Spider-Man to aid them to find the crook who somehow able to stay ahead of his unit. Mary Jane Watson, Spider-Man's love interest, figured out how the criminal does it after the hero informed her of the situation. After the police arrested his accomplice, the villain vowed to get even with Spider-Man and then escapes.

Mysterio appears again in Ultimate Comics Spider-Man #1, blasting Kingpin out the window of a skyscraper. He publicly confesses to Wilson Fisk's murder and threatens the city, stating that he is now in charge. He releases a fear hallucinogen across Manhattan in order to rob the Federal Bank. Spider-Man stops him and Mysterio's personal hatred for the web slinger increases.

Creating an illusion of the Hulk to lure Spider-Man to him, Mysterio ambushes and severely wounds the hero. Before Mysterio can unmask and kill Spider-Man, a mysterious vigilante rescues him and together they defeat Mysterio revealing his true face. Mysterio finds Spidey's blood on his broken armor and designs a Spider-Slayer who personally targets Peter. The mysterious vigilante defeats it and before Mysterio can do anything else the police rush to his hideout, which they found by tracking a piece of the Mysterio's tech. Mysterio curses and then proceeds to blow up his hideout.

It was revealed in Spider-Men that this reality's Mysterio is a simple android, remotely controlled in realtime by an 'avatar' program, that was created and sent forth by the Earth-616 Mysterio in order to conquer the world of the Ultimate Marvel universe.

Mysterio's suit is equipped with many special effects, devices, and chemicals that can be used in various ways. It includes a holographic projector, gloves that can emit hallucinogenic gases, as well as knockout gas, and a gas that can nullify Spider-man's "spider-sense". He also has a built-in sonar which helps him navigate while concealed in his smoke. With help from the Tinkerer, Mysterio has more advanced technology, including androids of himself. He is a master of illusion, trickery, and acting.

Mysterio appeared in The Spectacular Spider-Man TV series as Quentin Beck, who was a special effects expert with aspirations for acting and worked for the Chameleon along with the Tinkerer. He later took up the guise of Mysterio while working under the Master Planner (aka Doc Ock). This version of Mysterio presented himself as a technophobic sorcerer who claimed to be "saving the world from the evils of technology" while actually stealing the tech for the Master Planner. He also joined the show's second version of the Sinister Six. The Tinkerer built many androids of Mysterio for him, which helped both in battling Spider-man and eluding prison by sending a robot in his place.

Mysterio has been a boss of several Spider-man and Marvel video games, including Spider-Man 2 and Marvel Ultimate Alliance and the main antagonist in Spider-man: Friend or Foe? and Spider-man: Shattered Dimensions.

In this game, Mysterio was the main boss. He attempted to steal the Tablet of Order and Chaos to sell on the black market, and when Spider-Man tried to stop him, the Tablet was broken on the battle. Mysterio then discovered that it possessed great power and tried to take that power for himself when the four alternate Spideys gathered the pieces. When he finally got them all, he became a god-like being, now using real magic as opposed to the illusions and tricks from before bent on remaking the multiverse in his image.  Still, even with his amazing power and might, he was defeated by the combined effort of the four Spider-Men. 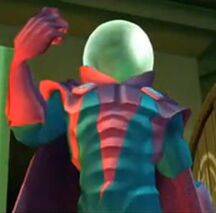 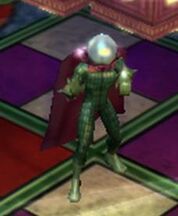 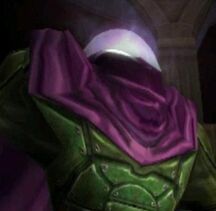 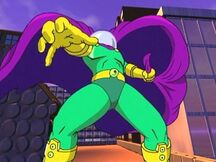 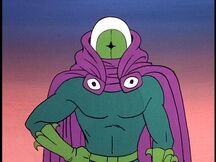 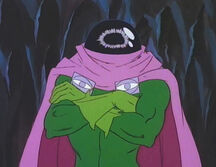 Mysterio (Spider-Man and his Amazing Friends)

A mask with smoke coming out of the eyes and is teased during the end credits of The Amazing Spider-Man 2. This could most likely be an updated version of Mysterio.
Add a photo to this gallery
Retrieved from "https://villains.fandom.com/wiki/Mysterio?oldid=1467884"
Community content is available under CC-BY-SA unless otherwise noted.