Collect the Tablet of Order and Chaos (briefly succeeded).

Create a new reality, take over as its ruler and defeat the Spider-Men (failed).

Quentin Beck, also known known as Mysterio, is the main antagonist of the 2010 video game Spider-Man: Shattered Dimensions. Being an illusionist tired of using conjuring tricks, he seeks the Tablet of Order and Chaos to make himself a god-like being so he can devour the Multiverse and reshape it into his own image. His Shattered Dimensions incarnation is much more dangerous than other versions of him.

He was voiced by David Kaye, who previously voiced Megatron both in Beast Wars and in the Unicron Trilogy, Chase Young in Xiaolin Chronicles and Stretch Monster's alternative in the second season of Stretch Armstrong and the Flex Fighters.

Mysterio shatters the Tablet of Order and Chaos during his fight with Spider-Man (who wanted to keep him from selling the tablet), causing problems with reality. Mysterio learns of the Tablet's power from a piece that he managed to acquire, allowing him to turn his illusions into real magical powers. He finds out that Spider-Man is gathering the pieces and hungering for more of its power. When Spider-Man gives Madame Web the tablet fragment, Mysterio attacks and threatens to kill her if Spider-Man does not recover the remaining tablet fragments for him.

Upon receiving the remaining pieces, Mysterio is transformed by the completed tablet into a mystical, godlike being bent on remaking all of reality in his image. He individually fights each Spider-Man in that version's decomposing dimension, and each one smashes Mysterio's helmet until all four beat him into submission.

The game ends with Madame Web returning each Spider-Man to his dimension (Spider-Man Noir, Spider-Man 2099, Ultimate Spider-Man and Amazing Spider-Man) and with Mysterio being sent to jail for his crimes. During the credits, he is sitting in a jail cell feeding goldfish in a bowl.

As he was before getting the tablet fragment, Mysterio has no powers and uses fake magic, holograms, and technology. When Mysterio only had a fragment he was able to use real magic, able to project energy, manipulate objects, summon and command beasts (like snakes of any size), and conjure fog he is able to walk on and teleport.

When Mysterio possessed The Tablet of Order and Chaos he was able to tear reality apart and he created the multiverse where all four Spider-Men had to battle him. He was able to summon anything and break reality apart. He was able to create suns in his hands, allowing him to summon multiple entities. He could travel through hyperspace in less than a millisecond. He could tear buildings apart with a mere thought of maybe thinking about tearing it apart, making him a formidible foe. When his helmet was cracked his powers were somehow weakened. When he possessed the tablet he grew much taller, way taller than Giant-Man.

Mysterio is fought in fourteen phases. He is rather unusual since he fights Spider-Man in deep space, with very little solid ground for the arachnid hero to use while they face off.

During the first phase of his battle, Mysterio will cast a light throughout his arena once every 15 to 30 seconds (often 20). Spider-Man has to sneak through the shadows and avoid the light to reach Mysterio and attack him. Mysterio has very little stamina during this phase of the fight, capable of being curb-stomped easily.

Now, Mysterio is using his superliminal travel to try to escape. Spider-Man has to enter his Flying Squirrel form to pursue him, dodging the barriers that are summoned as Mysterio tries to make his getaway. Due to their nature as dangerous fields of pure energy, these barriers are harmful to Spider-Man, not only damaging him but also slowing down the hero. Eventually, Spider-Man will reach Mysterio and has to damage him, finishing off with his web sling to make Mysterio punch his own face, which is what deals the most damage. After you deplete his Health Bar during this part of the battle, Mysterio will move onto the final portion of the battle.

During this portion of their fight for the Universe, Spider-Man and Mysterio take the battle to a debris ring. Mysterio stands in the middle as he sends dark energy spheres in Spider-Man's direction while at the same time summoning his Lovecraftian minions. Spider-Man has to destroy them to get to a large rock that requires his web-swing to send in Mysterio's direction, taking out a huge chunk of the entity's health bar. After this, Spider-Man has to make his way to the next area. The process repeats once more, and then it is just spider-Man destroying monsters and using his webs to fire rocks at Mysterio to knock him to his critical point. After Spider-Man punches Mysterio's face to drain the last energy Mysterio has in his health bar, Mysterio is beaten for good. 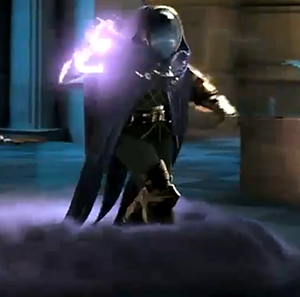 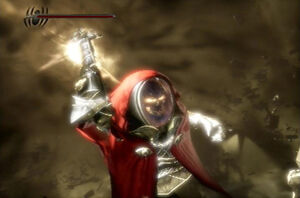 Mysterio with the power of the tablet. 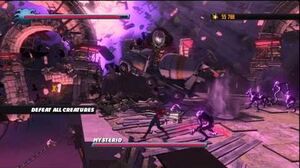