Wipe out humanity and make Earth a paradise.

The Mythos Cyborgs are a group of immensely powerful cyborgs believing themselves to be Greek Gods. They seek create a new, perfect world by killing off all the humans. They are major antagonists in the Mythos arc of the Cyborg 009 manga and the "Mythos" four-parter of the anime. This group consists of about 8 cyborgs.

The Mythos Cyborgs were originally created by Dr. Gaia, a scientist working for the Black Ghost organization.

After the cyborgs reached their completion, Dr. Gaia activated them and convinced them that they were Greek Gods who had returned to punish humanity for its sins.

First Encounter with the 00 Cyborgs

The gods caused natural disasters across the world, drawing the attention of the 00 cyborgs. Eventually the cyborgs found themselves face-to-face with Apollo, who stating his intention to destroy humanity. The 00 cyborgs fought against Apollo and his fellow "gods" but were no match for them. However, Artemis appears and puts an end to the fighting, convincing Apollo to pull back.

After the battle, Dr. Gaia questioned Apollo as to why he didn't destroy the 00 cyborgs, but Apollo stated he didn't believe mere cyborgs could compete against him. That same day, the 00 cyborgs arrive on the island the Greek Gods resided on. Artemis and Pan notify Apollo of the cyborgs' arrival and Achilles and Minotaur set out to defeat the cyborgs.

In the ensuing battle, Achilles was killed by Cyborg 009, but Apollo arrived soon after and severely wounded 009. Meanwhile, Poseidon and Atlas attacked the Dolphin, but the ship was able to escape thanks to 001's psychic abilities.

Later, the gods hold a funeral ceremony for Achilles. At the ceremony, Artemis leaves the Greek Gods, no longer having the will to go against humanity. She also tells Atlas and Pan to follow Apollo instead of her from now on. However, this prompts Dr. Gaia to go and shoot her while she's alone to prevent her from interfering with his plans.

The Mythos Cyborgs eventually encounter the 00 Cyborgs again when they launch another assault on their hideout. While Cyborgs 001, 007 and 008 and Dr. Gilmore infiltrate the island through an underwater cave the other cyborgs went to fight the gods.

Gilmore and his cyborgs eventually encounter Hera, who engages in a psychic battle with 001. Meanwhile, Artemis interrupts Apollo's battle with 009 to tell him Gaia's true plans andhow they are all just cyborgs created by him. Artemis eventually collapses from her wounds, causing Apollo to swear vengeance against Gaia.

Apollo goes to Gaia's underground laboratory and shoots the scientist, killing him. The remaining Mythos Cyborgs presumably died when the island collapsed due to Gaia's reactor overloading. 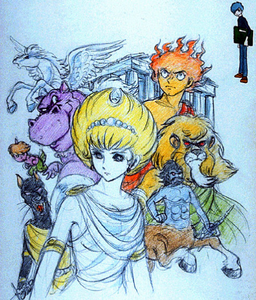 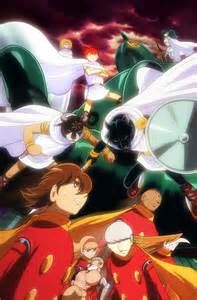 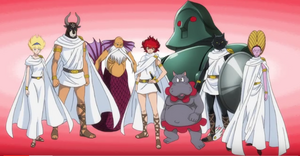 The Mythos Cyborgs in Cyborg 009 vs. Devilman

Dr. Gaia, one of the two Mythos Cyborgs creators

Dr. Uranus, another creator of Mythos Cyborgs
Add a photo to this gallery

Retrieved from "https://villains.fandom.com/wiki/Mythos_Cyborgs?oldid=4183554"
Community content is available under CC-BY-SA unless otherwise noted.