Chief mystic of the Fiendish Five

The art of voodoo

Resurrecting the dead for company (as a child).

Unleash an army of ghosts and ghouls at her command to take over Mexico (failed).

Mz. Ruby is an evil witch encountered in Sly Cooper and the Thievious Racoonus, serving as the main antagonist of Episode 3: Vicious Voodoo.

She is a large anthropomorphic alligator named after the jewel she has embedded in her belly button - she acts as one of the game's main antagonists and is a mistress of voodoo who resides in a dark and forbidden swamp where she commands an army of ghosts and voodoo-based monsters loyal to her will.

Coming from a long line of voodoo mystics, Mz Ruby was feared by all the other children, and delved into learning her family's magic as an escape from her loneliness. Learning how to summon the undead provided her with the only companions she had. Growing into a powerful, but deeply embittered, voodoo priestess as an adult, she turned to a life crime to punish the world for fearing her as a child, eventually becoming the chief mystic of the Fiendish Five. 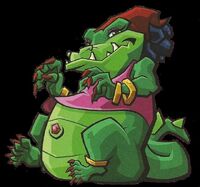 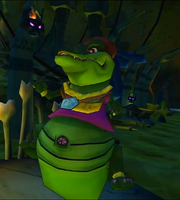 Mz. Ruby as she appears during her boss-fight in game play
Add a photo to this gallery

Retrieved from "https://villains.fandom.com/wiki/Mz._Ruby?oldid=3705082"
Community content is available under CC-BY-SA unless otherwise noted.