N'Astirh is a fictional demon from Marvel comics who became an enemy of X-Men, X-Factor and Excalibur - amongst other superhero teams and individuals in the Marvel universe.

N'Astirh was one of a number of major demons in Limbo, a demonic world originally ruled by the magician Belasco. Like the other major demon-sorcerers, N'Astirh coveted control of Limbo, and desired to become master of Earth as well. He waited and he watched.

After the young mutant hero Illyana became ruler of Limbo, things became tumultuous. Now known as Magik, she chose not to rule Limbo with the iron fist that demons were used to seeing in their personal rulers; while she was personally intimidating, she spent too much time on Earth to maintain firm control of the dimension.

N'Astirh began to gather his demonic agents and scheme grander schemes than a demon should scheme. Finally, his machinations came to a head. N'Astirh orchestrated a kidnapping of thirteen babies in hopes to sacrifice them in a ritual known as Inferno, which would have given him control over both Limbo and Earth.

His powers were augmented when the transmode virus infected him. He has shown control over the virus and uses it to transform, and convert others to technomatter to feed off of. 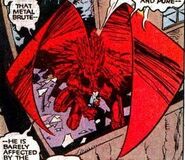 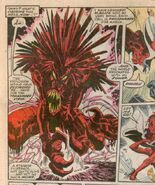