Control over the Demon Army
Strength

Help Scrappy-Doo take over Spooky Island and the world with an army of Demons (failed).

N' Goo Tuana is the secondary antagonist of the first live action Scooby Doo movie. He is a criminal who pretends to be a theme park actor of Spooky Island and serves as Scrappy-Doo's right-hand man as well as the partner of Zarkos.

He was portrayed by Steven Grives.

N'Goo is a man of average height with a toned build, his usual attire consists of a long maroon velvet coat with no sleeves, black trousers with a red belt buckle, boots and several black and golden bracelets around his arms. In one scene he is seen wearing a brown vest however he goes back to his normal attire later on. He is a bald man with several tattoos on his head and one tattoo on his chest of a human heart that appears to be on fire.

He was a mysterious thug with an intimidating attitude plotting to take over and rule the world with his allies and the Spooky Island Demons. He was also incredibly theatrical and showman-like, being a talented narrator and pianist and always appeared to have something of a charismatic and friendly aura about him contrasting from his villainous nature.

N'Goo Tuana is a criminal who posed as a theme park actor on Spooky Island, and portrayed the character who was obsessed with resurrecting demons who lived on the grounds of the island years ago with his partner Zarkos. He later encountered Scrappy-Doo, who was disguised as Emile Mondavarious of whom he worked with in take over the world and resurrect the demons. However, N'Goo didn't know that Emile was Scrappy, and that wanted to create a strong form and get revenge on the Scooby-Doo gang.

N'Goo attempted to claim the Daemon Ritus, a mysterious artefact that Scrappy would use to claim all of the souls to create himself a stronger form. When the Scooby-Doo gang came to the island, N'Goo was ordered to get rid of them, and collect their souls so that the demons can be placed into their bodies. He learned from Zarkos that Mystery Inc had obtained the item and as such went to the bar they were at in an attempt to reobtain it, in the process finding himself listening into Velma's recount of Scrappy Doo on one of their adventures while he was playing the piano. The crowd applauded his performance and he was thankful for their attention. At this moment however the demons invaded the building and took Fred and Velma captive. N'Goo seized his opportunity and headed for the untouched Dameon Ritus before being bested by Daphne. He tried to rush her in order to get it back but found himself being pulled away by two fleeing patrons "rescuing" him from the event which he himself was actually involved with.

The following day N'Goo told Zarkos that Daphne was the one who held possession of the Daemon Ritus and as such he went after her while N'Goo helped Mondavarious with preparations for sacrificing Scooby as part of the soul absorbing ritual, having trapped and led him to Mondavarious where Scooby agreed to be the sacrifice, not realising that it wasn't actually a good thing.

During the ritual, N'Goo monitored the pinaster where he concentrated all of the soul energy into the Daemon Ritus, allowing Mondavarious to absorb 100s of souls. He then prepared to use Scooby as the final sacrifice for his puzzle before Shaggy intervened and knocked him off course sending Mondavarious flying through the air while Scooby's soul returned to his body. Fred and Velma then noticed that Mondavarious' body was artificial and pulled the synthetic face off to reveal he was a cyborg being operated by none other than Scrappy-Doo who went under a hideous transformation into a beastly form of his original self after absorbing all of the soul energy. Naturally he was surprised to discover that Emile was actually a puppy in disguise, but continued to assist him regardless for some reason. He helped Scrappy during the final battle by attempting to remove Scooby's soul yet again, however he was knocked unconscious by Fred after being hit over the head with a climbing rope after being distracted by Zarkos falling from the ceiling onto the vat of souls after Daphne had bested him, allowing Shaggy to take control of the pinaster and remove the Daemon Ritus from Scrappy's chest reverting him to his original form. At the end of the movie after his defeat he, Zarkos and Scrappy were taken away by police helicopters to serve jail time for their crimes. 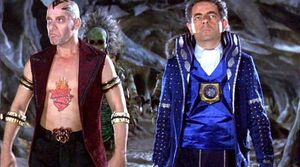 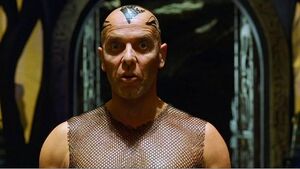 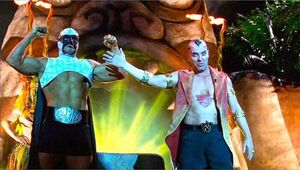 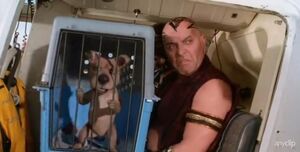