NAMBLA (the North American Man-Boy Love Association) is a real-life organization that appears as the main antagonist faction in the South Park episode "Cartman Joins NAMBLA". They were a group of pedophiles who seek for ways to catch little boys. Cartman's attempt to meet more mature friends leads to him encountering several NAMBLA members and becoming the organization's poster child. Once he and the boys discover what NAMBLA is really all about, they flee. The pedophiles are then arrested after mistaking Kenny's dad for a young boy and gang-raping him.

The North American Man-Boy Love Association is an organization that promotes sex between grown men and young boys and is working to abolish age of consent laws, and the group exists in real life as well. Cartman, in an effort to separate himself from his friends and seek out mature companionship from grown-ups, agrees unknowingly to become poster boy for the organization, whilst he is being eyed by a number of pedophiles within the group. The NAMBLA members throw a party and invite the other young boys in town including Butters, Craig, Clyde and Timmy. When NAMBLA members do reveal their true intentions the children are chased around by the men attempting to rape them. Although the children managed to escape from their clutches before the harm can be inflicted, Stuart McCormick accidentally walks into the room where the men are and he is confused for one of the boys, and is tragically gang-raped by the men greatly traumatizing him.

They are arrested by the police at the end of the episode. 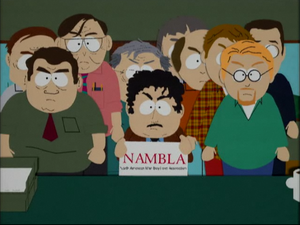 Retrieved from "https://villains.fandom.com/wiki/NAMBLA_(South_Park)?oldid=3925633"
Community content is available under CC-BY-SA unless otherwise noted.