Villains Wiki
Register
Don't have an account?
Sign In
Advertisement
in: Organizations, The King of Fighters Villains, Video Game Villains,
and 14 more

The King of Fighters '99

Nests (The organization bears the name of its founder)

Possess the ability to create superhumans

Collect fighters' battle datas in the tournament and defeat them by using another team or one of their agents.

Use the data obtained to make their army of unstoppable fighters.
World domination.

Hegemonic Bio-Engineers
The NESTS is a secret organization that had control over all kinds of criminal activity throughout the world. Their dealings made many corporations around the globe to go bankrupt, and so their members were wanted by all investigation agencies, but no one could find their headquarters, since it was on a satellite hovering around the world. The NESTS had a high-technological arsenal of weapons and machines at their disposal, which allowed them to research on many fields of science, specially on bio-engineering.

To fulfill their plans of world domination, they bought the sponsoring rights of the King of Fighters, using the tournament as a tool. They planed to collect the data from the fighters of the tournament and use it to create bio-engineered super-soldiers capable of defeating all the fighters, then without resistance conquer the world with their army. 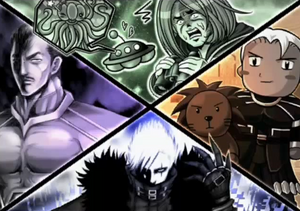 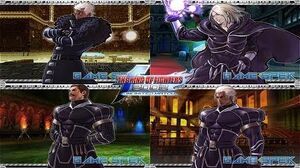